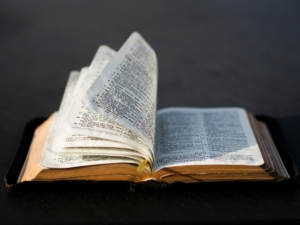 I once heard a woman who professed to be a Christian declare, in the context of a disagreement about what the Bible says about God and his ways, “I don’t care what the Bible says. It has nothing to do with my faith.” Her view on the particular subject in question squared with many people’s popular notions about God, but not at all with what the text of Scripture says about him.

What I hope you will come away with after reading this article is a firm resolve to establish and examine your own views and opinions about God and his ways based on the text of Scripture. Here are five ways in which you can do this:

One: Believe the Bible’s plain statements about God. For example, the Bible says of God, “The Rock, his work is perfect, for all his ways are justice” (Deut. 32:4). It also says, “This God—his way is perfect” (Ps. 18:30). These are plain and true statements about God. However, when you read other things in the Bible that describe God doing or commanding things that seem shocking or strange (such as the slaughter of entire cities, or biblical doctrines like election, predestination, and the doctrine of hell), don’t allow yourself to question God’s goodness or perfection. If you think about it, it would be irrational to stand in judgment of the God whom the Bible declares to be perfect in all his ways, just because you’re uncomfortable with some of his ways revealed in the same Bible. We may wonder about some of the things he does, or decides, or decrees, but we know his way is perfect!

Two: Always interpret and understand a text in its context. Before settling on an interpretation of a passage, be sure you know as much as you can about who the biblical author is, to whom he is writing, why he is writing, and what he has said up to the point of the passage you are studying. Only then can you hope to accurately understand what it means and apply it to your life. Be slow to compare your passage to similar passages in different parts of the Bible. Even though there may be similarities, the immediate context is the most important determiner of meaning and application.

Three: Be careful not to over-value word studies or allow them to supersede the importance of context. There are many Bible-study tools available online. Some of them will reveal to you the meaning, or range of meaning, of a particular word in the original languages. It can be tempting to settle on the most popular or common usage of a word, and then force that meaning into the text you are studying. Always remember that most words carry a range of meaning, and the most important determiner of meaning is the context in which the word is used. If context is king (as they say), word studies are useful servants of the king.

Four: Be willing to disagree with even well-known Bible teachers if what they are teaching does not square with the biblical text. Every godly Bible teacher studies hard and means well, but every godly Bible teacher is also human. Even the most widely published or broadcasted teachers are capable of mistaken interpretations. Allow that text to be the final determiner of what you believe, not the popularity of the teacher.

Five: Always be willing to change your view of a particular text or doctrine. Hold on to important biblical convictions firmly, but with humility. If you learn from your own diligent, prayerful study of Scripture that you have been in error, or if you are taught by someone who can demonstrate from the text that your long-held view was wrong, don’t be unwilling to change your position due to pride or loyalty to a traditional view.