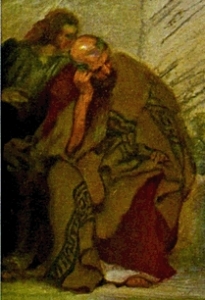 One of the saddest notes in biblical history is found in the book of Joshua. The children of Israel were coming into the land that had been promised to them after 40 years of wandering in the wilderness. God had set everything up. He put dread into the heart of the people in the land, His usual pre-war tactic. He provided an able leader, Joshua. And He promised, and God’s promise is always enough. It was as good as done.

The plan was simple: totally wipe out the occupants of the land. Do not spare them, do not make alliances with them, do not intermarry with them or they will turn your hearts away from Jehovah God.

First, they fought the central campaign, dividing the country across its middle by destroying Jericho and Ai. They were cocky at Ai, but finally got the job done. Mistake number one, but they learned a lesson. Good move.

But something awful happened immediately after Ai. People from Gibeon, a great city of the Hivites, came to Joshua. Dressed like they had been on a long journey, they craftily asked for terms of peace through a covenant. Foolishly, Joshua fell for it. The Israelites made an alliance with a city that should have been destroyed, and all because they “did not ask for the counsel of the Lord” (Josh. 9:14). Mistake number two.

In battle, the Israelite warriors had taken on the Anakim giants in the hill country region of the Amorites. Caleb himself fought to clear out several of the giant’s cities where he was to settle. Nonetheless Joshua writes: “There were no Anakim left in the land of the sons of Israel; only in Gaza, and in Ashdod some remained” (11:22). Some remained? Goliath would come out of these remaining Anakim from Gath five hundred years later. Mistake number three.

Then came the southern campaign and the northern campaign. All was looking good . . . or was it? As the tribes of Israel began to occupy the conquered territories they met with more opposition from those cities that had not been destroyed in the major campaigns. A significant cleanup operation was needed by the tribal groups as they occupied their section of the country. But it just didn’t happen as it should have.

Listen to Joshua’s pitiful words for some of the tribes:

“But the sons of Manasseh could not take possession of these cities, because the Canaanites persisted in living in that land” (17:12)

And the pathetic story goes on, tribe by tribe. The land, though essentially conquered, was infested with pockets of the enemy still. They were cowering, but still there.

When Joshua gives his farewell address, he warns the Israelite tribes about what will happen if they mix with the people they did not remove when they had the opportunity.

“Know with certainty that the Lord your God will not continue to drive these nations out from before you; but they will be a snare and a trap to you, and a whip on your sides and thorns in your eyes, until you perish from off this good land which the Lord your God has given you.” (23:13)

The book of Judges tells “the rest of the story.” The Israelite people did what they said they would not do. They intermarried with the enemy, worshipped their gods, and followed their ways. The enemy within the country rose up, time after time, to defeat them. God graciously sent judges to defeat these enemies, but soon the Israelite people would drift back into sin. The enemies they did not deal with adequately at the first were a constant snare to them, just as Joshua warned.

You may say, “I wouldn’t have done that.” But we have the advantage of perfect hindsight, don’t we? Rather, our actions give away the reality that many of us would have done just as they did. We have also left the work undone. Look within and see. Do you find enemy holdouts in your life? Sins that rule you? Habits that are a snare to you?

Paul tells us in the book of Romans that we must “put to death the deeds of the body.” Don’t make alliances with the enemy sins that at first look as though they will placidly sit by without harming you. It is these very sins that may one day rise up to dominate you. Sin is a tyrant that must be thoroughly dealt with, or he will remain a threat to your peace and effectiveness all your days . . . “a whip on your sides and thorns in your eyes.”

Kill the enemy or it may kill you.