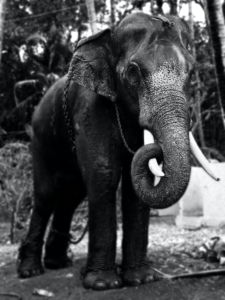 The apostle Paul speaks of our helplessness before the tyrant Sin. It reigns over our lives, he teaches in Romans 6. He speaks of it as a slavery that cannot be broken. If a man without Christ attempts, through sheer will power, to correct himself, he will do it for the wrong reason—his pride, cringing fear, or some other selfish desire. Sin is sin not only because of the act itself, but also because of the motive behind it. In fact, the heart is the worst part of it. Who, on his own, has ever been able to rule over it?

“Can the Ethiopian change his skin or the leopard his spots? Then you also can do good who are accustomed to doing evil” (Jeremiah 13:23). “There is none that does good; there is not even one” (Romans 3:12).

Sin commands the strongest of men. A president leads the most powerful nation on earth but is captivated by the look of a beautiful woman and is put in her chains by his own lust. “Captivated” is the right word. A business man signs the big contract winning the accolades of his peers, yet cannot curb his appetite for alcohol. He makes a fool of himself as he goes from bar to bar. A religious leader preaches to thousands on television yet is brought down to dust by his anger at home.

Sin is the worst of tyrants. It has the power of death.

“Each one is tempted when he is carried away by his own lust. Then when lust has conceived, it gives birth to sin; and when sin is accomplished, it brings forth death,” declares James (James 1:14-15). Describing the naïve young man and the alluring harlot, Solomon says, “As a bird hastens to the snare, so he does not know that it will cost him his life. . . . Her house is the way to Sheol, descending to the chambers of death” (Proverbs 7:23, 27). “What benefit were you then deriving from the things of which you are now ashamed?” asks Paul. “For the outcome of those things is death (Romans 6:21).

Concerning this issue of the dominance of sin, remarkably, the believer has a decided advantage. It is not that a believer is incapable of sinning, even the worst of sins. He can do them all. Yet, the believer does not have to sin.

A young elephant may be trained to stay in one place by use of a stake in the ground. Pull as hard as he will, he cannot move beyond what the stake and chain will allow. However, when he is bigger, the stake is only a deception. It is far too small to hold him in place. But his experience tells him otherwise. So, without testing, he is held by what has almost no power at all.

Like the elephant on the chain, sin’s absolute dominance is a deception for the believer. What held him in the past does not have the authority and power to hold him now—unless he is deceived.

“But now having been freed from sin and enslaved to God, you derive your benefit, resulting in sanctification, and the outcome, eternal life” (Romans 6:22). “Therefore” states Paul, “do not let sin reign in your mortal body that you should obey its lusts (v. 12). Why? “Our old self was crucified with Him, that our body of sin might be done away with, that we should no longer be slaves of sin; for he who has died is free from sin” (v. 6-7).

Although our death to sin in Christ’s death for sins is a mystery in many ways, it is the actual means of our liberty from its control. We have died to sin in Christ and are therefore freed from its absolute tyranny. There is no such thing as perfection, until heaven, but when we consider any sin individually, we must assert: We don’t have to obey it! In fact, because of the indwelling Spirit, we don’t want to obey sin when we view it objectively and thoughtfully. It is not our master.

But sometimes we are deceived. Imagine a man working for a cruel boss in an assembly line. The boss yells at him all day. He makes him do extra work, expecting the impossible. There is no hope of ever winning his approval. Eventually, the man leaves this job and joins himself to another company. This new foreman is entirely different—kind, understanding, helpful.

One day the worker sees his old boss coming down the sidewalk toward him. He cringes, expecting the worst. When the man approaches he yells out commands. Getting in his face, he tells him that he has no choice but to obey. Should he? Will he? Perhaps. But he would be a fool to do so because he is completely free from his control. He is under another man’s superintendence now. If he obeys him, it is only because he is deceived, not because he must. He should rather laugh at his commands. They are toothless.

“Even so consider yourselves to be dead to sin,
but alive to God in Christ Jesus” (Romans 6:11).