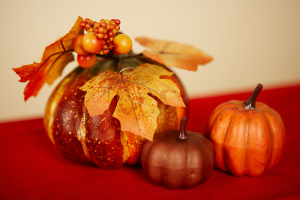 Every year in late November, Americans are reminded to be thankful. Though some National Football League broadcasters have done their best to rename the day after the traditional main course of the meal (i.e., “Turkey Day”), thoughtful Americans persist in calling the day what it was intended to be called: “Thanksgiving.”

But in reality, we should need no reminding to be thankful. Giving thanks should be a “no-brainer. It should be natural for every person to feel thankful—not just once each year, but every hour of every day—and to express those feelings in thoughts and words.

In Romans 1, Paul firmly establishes the fact that being thankful to God should be a natural human disposition. You might say it should be our “default” setting. He does this by revealing the evil of man’s ungratefulness and the wrath that it has evoked in God.

In verse 18 he begins to speak about the wrath of God, which is being revealed due to mankind’s unrighteousness. We might imagine that he would begin describing this unrighteousness by listing “big” sins like murder, sexual immorality, or theft. Instead he begins with mankind’s failure to acknowledge and be thankful to God who created them.

For what can be known about God is plain to them, because God has shown it to them. For his invisible attributes, namely, his eternal power and divine nature, have been clearly perceived, ever since the creation of the world, in the things that have been made. So they are without excuse. (vv. 19-20)

Without excuse for what? Paul continues . . .

For although they knew God, they did not honor him as God or give thanks to him, but they became futile in their thinking and their foolish hearts were darkened. (v. 21)

In reality, mankind’s worst sin is the failure to acknowledge and give thanks to God. As we read further, we learn from Paul that the kinds of sins I mentioned above—the ones we typically think of as “the big ones”—began to be practiced without restraint as the result of God’s wrath for their ungratefulness and refusal to worship him.

So are you a thankful person every day, not just once each year? When you receive good things, is your natural inclination to express thanks to the giver? Is this especially the case when you consider the things God gives you (and ultimately, every good thing comes from him, as James 1:17 makes clear)? I sincerely hope so, because if this is not the case—if you are not a thankful person—it reveals in you one of the greatest evils imaginable. It makes you worthy of God’s wrath.

When we consider this in more depth, God’s anger at mankind’s ungratefulness is not surprising. Ungratefulness is something we all tend to despise in others, and should despise in ourselves. It is the attitude that flows directly from the heart of pride, which resides in the person who presumes that he is owed everything: “I deserve to live, to breathe, to eat well, to be comfortable, to be gratified, to enjoy, to have all that others have, to be entertained.”

When the ungrateful person does not receive what he expects, perhaps what he sees someone else receiving, he perceives that a wrong has been done and he grumbles, whines, and complains. “That’s not fair!” On the other hand, when he does receive what he expects, he simply thinks the right thing has taken place. “It was rightfully mine” (he thinks), I was owed it” (he presumes), and now I have it.” “No need for feeling or expressing thanks in such a case as this” (he reasons). “After all, am I obligated to thank my employer for not withholding my wages, or for not paying me less than someone else who does the same work? Am I obligated to thank a burglar for not breaking into my house and stealing my possessions? Why then should I be compelled to give thanks to God for simply supplying my needs? That’s just what God does. He would be wrong not to do it.”

And so the ungrateful adult (who was likely an ungrateful child who was never properly trained to be appreciative) persists in seeing himself as the rightful—indeed, worthy—recipient of all the good things he receives. And so he persists in manifesting his self-deluding pride.

Oh that we would root this deplorable, evil attitude of ungratefulness out of our own lives! Oh that we would take pains to train our children to feel and express genuine appreciation for the things they presently take for granted. Oh that on this Thanksgiving Day, every American, along with every person of every nation, would humbly bow in adoring and grateful worship of the God who not only has created and sustained them, but has given the world his Son to redeem them from their sins and grant them eternal life! Only the most ignorant, hard-hearted, prideful person could persist in failing to give thanks for such a gift as that!