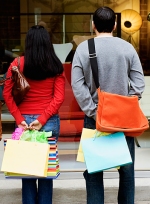 There is one day that we as a nation, from our earliest history, have set aside to thank God for His blessings. The Pilgrim Fathers did not know that their first Thanksgiving Day would result in a national holiday celebrated for hundreds of years. Centuries of Thanksgiving Days, rich with memories, family togetherness, and contemplations of God’s goodness have come and gone. And the nation is the better for it.

But, now, in the midst of financial pressures and growing secularism, bold merchandisers all over the United States are opening up their stores and their cash registers on Thanksgiving Day in order to receive your money, intruding on this normally restful and cherished day to get the financial jump on the Christmas season.

Is there anything wrong with that? After all, God doesn’t command us to give thanks on any particular day. We have no Thanksgiving Day proclamation in the Bible. Yet, God does command all men to give thanks. In the book written to the Romans, the apostle Paul reminds us that the heart of man’s sin and judgment begins with the refusal to show gratitude to God. Giving thanks will not make a man or woman a true Christian, granted, but it is nonetheless an expectation for all people to recognize that everything good and true comes from the Creator God.

Perhaps we can’t stop store owners who are suffering from fiscal straits from opening their doors, but for our part we can put first things first regardless of what they do. Even if Thanksgiving Day is not about thanking God for you, your family needs you there for the one time of the year usually unblemished by commercialism.

Let’s look at that verse in Romans:
For even though they knew God, they did not honor Him as God or give thanks, but they became futile in their speculation, and their foolish heart was darkened. Professing to be wise, they became fools. (Romans 1:21-22)

When Paul says, “they knew God,” he is not saying that all people know Him in a way that makes them His people for all eternity. The letter of Romans will explain that true believers will have to come by faith to Christ in order to be correctly related to God and to have their sins forgiven. Paul is saying that creation has so revealed the existence of God that every man and woman knows God is there. To say He is not there is equivalent to saying that oxygen does not exist, while all the time we are breathing it in. Denying that God exists is a man’s prerogative, but, according to this passage, that is done as a suppression technique in order to make it possible to sin with impunity.

If He exists, Paul says we must honor Him and give Him thanks, or we will be among those men and women who, while professing to be wise, are actually fools. Giving thanks is expected from all who recognize God exists. It doesn’t secure eternal salvation, but it is a foundation for a fuller belief in God and His Son, Jesus Christ. “In Him,” Paul says later to philosophers in Athens, “we live and move and have our being.”

So, when the turkey is being served, thank God for all He has done for you. And while the last pieces of the pumpkin pie are being eaten late on Thanksgiving night, turn your heart toward God again and sincerely express your gratitude.

And, more importantly, ask God who has done so much for you, to reveal what it means to be a true believer in Christ, and plead with Him to let your life be fully committed to the One to whom you owe everything.