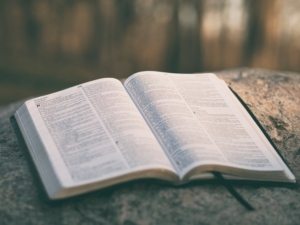 My brother pastored an unconverted man on the rolls of the church. When it was discovered, some of the men in the church began to share Christ with him and soon he became a true believer in Christ. His name was Bill Beery, a direct relative of the famous deceased actor Wallace Beery.

Bill was a physically imposing mechanic at 6’ 6”. But Lou Gehrig’s disease soon wilted him into a shadow of the man he had been. But he had Christ. He was able to live four more years—far beyond the doctor’s expectation. What amazing Christ-filled years those were.

The disease itself acted on his body like a slow-release implosion of a skyscraper. It was so debilitating that most who have it remain depressed until death. But, again, Bill had Christ.

He also had a Bible and the pleasure of talking with God, the Creator of the universe and the ruler of everything. He took prayer and his Bible reading seriously. Prayer and Bible reading became his life. He was genuinely delighted in God and saw him as his treasure. So, praying was not hard and reading words from God were strengthening in ways that most of us who are believers understand, at least on some level. He became the person to contact when you really needed something to be prayed through. God was with him in his trials. God used him.

It’s an easy thing to talk about trials of others, but much more difficult if they are our own chronic struggles. But Bill’s pain was increased far beyond merely the shrinking of his body into a frail and dying heap. During his four remaining years, one of his brothers was tragically killed in a gun accident, and before those years were finished, his other brother hit a light pole in his car and was also killed. This man with Lou Gehrig’s disease outlived his two healthy brothers. Searing loss and pain far more crushing visited that struggling family in ways that we ourselves surely would find almost unbearable.

Yet, Bill had Christ and he had a Bible.

When the illness got so bad that he could not turn the pages of his Bible, his friends in the church built him a stand that could hold it in front of him. With a pencil in his mouth, he turned the pages with the eraser end of the pencil.

He read the Bible through three to four times each year. When he could no longer read, he listened to the Bible on audio.

Bill Beery had Christ and he had a Bible, and with these he waged war on death. Through Christ he reigned in victory over death’s power forever. At his funeral, fifteen men were converted to Christ.

In some ways, it should be thought of as very abnormal for a person like you and me to be born into Christ’s family, to wear his name, to feel that we genuinely love him, but to find ourselves so distracted with life that we do not have time for the Bible and prayer on any serious level. It’s more than strange, given our relationship with Christ—it’s also telling. Loving Christ in word only is a description of those who are actually deceived about their relationship with Christ.

What prevents you from taking the Bible and prayer seriously?

And encouragement to pray Losses of a Prayerless Christian