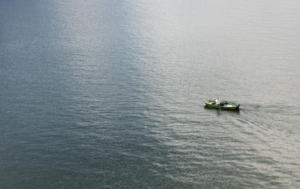 “For this reason we must pay much closer attention to what we have heard, lest we drift away from it” (Hebrews 2:1 NASB).

Some time ago, I spent a day on a Florida beach with my family. Nestled in my inner tube (not the one I grew by eating too much), I paddled out a little from the land to tune out the world and to rest on the soothing undulations of water beneath me. All was perfect for a while.

Yet my rest was interrupted when I discovered that I had floated too far away from the family—dangerously far out from land. I could no longer remain with my mind in neutral. Instead, neurons firing, I took quick stock of the situation and immediately began to kick and slap the water with everything I had. The going was difficult but I finally managed to land myself and the inner tube back on land. Even then, when I finally slogged on to the beach, I was a considerable walking distance from my starting place.

You know what it took for me to drift out so dangerously far? Nothing!

I got there by not paying close attention, the same thing the readers of this Hebrews letter were doing. But the drift they were in danger of experiencing had far greater consequences than mine.

Away from what were the readers in danger of drifting? What had they heard to which they did not wish to pay attention?

The words they were in danger of drifting from were those of the Son of God Himself, as stated in the first verse of this probing New Testament book.

“God, after He spoke long ago to the fathers in the prophets in many portions and in many ways, in these last days has spoken to us in His Son . . .”

These words were not just from any sort of person, but from the divine Son of God, who is (as the passage states) . . .

After comparing Jesus to angels, demonstrating that He is far superior even to these majestic beings, he makes this assertion:

“For if the word spoken through angels [meaning the OT Law] proved unalterable, and every transgression and disobedience received a just recompense, how shall we escape if we neglect so great a salvation?” (2:2-3).

This was written to veteran Christians, those who are said to have lost houses and lands because of the gospel.

Are you in danger of drifting away from the words of Jesus?

I once knew a famous classical musician who played for one of our major city orchestras. He was, in everyone’s mind, a devout believer. He knew a lot about doctrine and often contributed to the discussions and leadership of his church. But he drifted. In fact, he drifted so far away that he could not find the beach again. He is still out there as far as I know, divorced now from the beautiful family he once loved, away from the believing people of God who sought so diligently to bring him back, away from all that is beautiful and enriching in Christ, away from the hope of heaven.

His drifting took him that far away, far enough to discover that he was not a true believer at all, nor had he ever been.

“How will you escape if you neglect such a great salvation?”