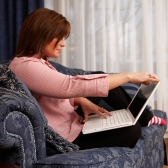 I hope I didn’t look as foolish as I felt.

I was talking with a group of women after church, and one of them said something that left me dumbfounded.

Earlier in the week, one of us found a simple freeware computer game and emailed it to the group. The game proved to be addictive—we were all spending more time than we could afford playing it. We commiserated about our lack of self-control, but none of us seemed to be taking the conversation seriously until one woman said, “I was convicted about wasting time with the game, so I deleted it.”

That simple statement hit me like a frying pan to the back of my head. The idea of deleting the game had never occurred to me. I knew that the game itself was neither good nor evil. I knew that to play a game in my free time was a liberty I possessed. I also knew I was abusing that liberty over and over by playing when I should have been working. But I wasn’t taking my sin (of neglecting my duties at home) seriously enough to do what it would take to stop sinning.

Jesus has ordered us to part with anything that causes us to sin, even something as valuable as my right eye or your right hand. He commands us to take every sin seriously. And that includes the sin of wasting time to the neglect of our duties as wives and mothers.

According to the Entertainment Software Association, “Forty percent of all players [of computer games] are women and women over 18 years of age are one of the industry’s fastest growing demographics.  Today, adult women represent a greater portion of the game-playing population (33 percent) than boys age 17 or younger (20 percent).”  [1]

And according to a study commissioned by Pop Cap Games, “Contrary to prevailing stereotypes, the average social [i.e. Facebook] gamer is a 43-year old woman. . . . 38% of female social gamers say they play social games several times a day.” [2] It’s not necessarily wrong that women are spending some free time this way, but it is certainly an area of life that believing women need to monitor and control.

Let me be clear. All entertainment (including computer gaming) is not a waste of time. But when an entertainment causes me to neglect caring for my family, serving my church, Bible-reading or prayer, I need to take it seriously. I do not have the option of half-heartedly bemoaning my lack of self-control as I continue playing Angry Birds on my cell phone. The situation calls for radical change. Real repentance means not just to recognize and be sorry for my sin, but to actually turn away from it.

So does that mean that we should all delete every video game, burn our Wiis and boycott Facebook? Probably not. But what it does mean is that as redeemed women, we should be careful to think about our entertainments soberly, so that we are willing to give up whatever we need to in order to lead holy lives. Those things we may be called to “pluck out” or “cut off” will be different for each of us. For one woman, it might mean putting the gaming system in the closet for a few weeks. For someone else, it might mean unplugging the computer during the day or deleting a Facebook account until the habit of wasting time with it is broken.

For me, it meant going home to delete a computer game.