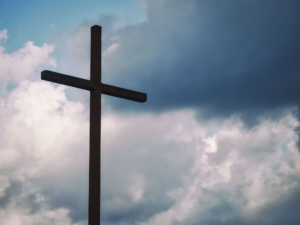 The cross is the character of Christianity.

As the self-appointed spokesman for Jesus’ handpicked coterie, Peter says the right thing at the right time: “You are the Christ, the Son of the living God.” But Peter cannot leave good enough alone. As Jesus goes on to explain for the first time that He will go to Jerusalem, suffer, die, and be raised again, Peter rebukes Him for such an outlandish notion. “Never! Not you! God forbid it, Lord!”

Within moments of Peter’s sky-scraping avowal, for which he will always be remembered, Jesus calls Peter “Satan” (“Get behind Me Satan”) and declares that he is not setting his mind on God’s interests, but man’s.

It was God’s interest that Jesus must go to the cross; it is His interest that you and I bear ours also. The next pronouncement follows this incident and the revelation of Jesus’ Jerusalem itinerary, and leans on it for meaning:

Then Jesus said to His disciples, “If anyone wishes to come after Me, he must deny himself, and take up his cross and follow Me. For whoever wishes to save his life will lose it; but whoever loses his life for My sake will find it.

For what will it profit a man if he gains the whole world and forfeits his soul? Or what will a man give in exchange for his soul? For the Son of Man is going to come in the glory of His Father with His angels, and will then repay every man according to his deeds. (Matthew 16:24-27)

Jesus was not informing the disciples, or us, of some form of elevated Christianity, but of essential Christianity. He is not giving us a missionary verse, applicable only to those who will advance beyond the ordinary in their loyalty. He is meaning that we either go this way, or we lose our souls.

It is common for us to spiritualize such a verse, as if the cross were about our dying to self, or “reckoning ourselves dead to sin” as found in Romans 6. It is related, of course, but is far earthier than this. To bear our cross is to take on ourselves whatever suffering, sacrifice and substitution is necessary for doing what interests God. Jesus was specific about saying that it is “our” cross that we are to bear, not His. But it is like His, having the same sacrificial qualities. It is not a perfection (as Peter often illustrated), but a direction (as Peter also illustrated).

By substitution I mean the humility to take someone’s place in order to demonstrate the meaning of the gospel; to take their place, pay their price, to give what is yours in their stead. In the smallest sense, it is shooing someone else out of the way and washing the dishes yourself. It is by practicing the smallest sense of this idea that we will be prepared for its larger use.

Joseph Tson, a beloved Romanian leader who was subjected often to suffering for the gospel, said: Our cross is not for propitiation; our cross is for propagation.

The call to follow Christ is intentional, costly, and rewarding, for in going that way you gain your soul.

If you take the other course, if you pursue your own interests and are successful to the point of gaining the entire world, what profit is there in that at the judgment? And, what would you give in exchange for your soul when you stand before God? Would you not give a trillion such worlds if you had them to give?

It is the cruci-centric life that shouts the gospel loudly enough for people to hear.