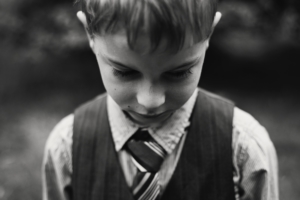 This is the story of a boy who could have been named Achan.

You remember Achan, probably the most infamous example of coveting in the history of Israel. He was the man who, during the conquest of Jericho, coveted and took forbidden items from that city. His eventual admission of guilt was this: “When I saw among the spoil a beautiful cloak from Shinar, and 200 shekels of silver, and a bar of gold weighing 50 shekels, then I coveted them and took them. And see, they are hidden in the earth inside my tent, with the silver underneath” (Josh. 7:21). Achan’s sin was discovered when God caused Israel to suffer a devastating defeat at Ai (Josh. 7:1-26).

Achan was a grown man who knew in detail what God required of him. The boy in my true story was only four years old, with the typical faults and foibles characteristic of that age. But he was also well trained by godly parents and was typically a pleasant and obedient child. On this occasion, however, his actions and attitudes revealed with crystal clarity the corruption naturally residing, not only in the hearts of informed adults like Achan, but in every human heart from birth.

It all started with a gift of a cheap plastic whistle. Whistles were given to each child in his family, and the boy had hand-picked the one he wanted—the one shaped like an airplane. The next morning, while his sister was in another room, he took quick action stemming from a covetous desire that had been brewing in his heart. A minor difference in style now made her whistle much to be preferred over his. Having coveted her whistle in his heart, he stole it and hid it.

Being only four years old, he did not think through the consequences. His sinful act was not only illogical (how would he ever be able to enjoy his new treasure without revealing his sin?), it was also easily and quickly discovered by his sister, who of course protested to her mother for justice. One would think the saga would have ended at this point, but now, surprisingly, even more hardness of heart was revealed. The boy disobeyed his mother’s command to give the whistle back by refusing to reveal its location. When assurances of punishment were issued, he feigned obedience by taking his mother to the supposed location of the hidden whistle, only to have his deceit revealed when it was discovered that he had intentionally taken her to the wrong place.

Now, with initial punishments being administered by both parents, including the promise that all of his other toys would be withheld from use until the whistle was returned, the irrationality of his sin became clear. With sour-faced cries of misery, he insisted that he didn’t care about all the other toys. He only wanted THAT whistle (which, again, he was told clearly that he would never be permitted to have or play with).

For nearly two days he rebelliously stood his ground, even though appropriate and repeated discipline was administered, and even though all ordinary privileges were stripped away. He was permitted nothing other than to sit quietly near his mother or father, not playing, not enjoying any of the typical delights of childhood. Furthermore, as Achan’s sin affected the entire nation of Israel, this boy’s sin affected his entire family. Everyone was displeased with the boy’s sin, and its effect was not limited to him. The mood in the household was somber and quiet as everyone waited and watched him suffer justly in self-imposed misery.

Call Him Zacchaeus Instead

Finally, a breakthrough! The location of the stolen whistle was accidentally discovered. His mother, being wise, required the boy to retrieve the whistle from its now-known hiding place and return it to its rightful owner. This providential discovery brought floods of emotional relief to the boy (and to the family!) and he gladly and apologetically complied. His heartfelt apologies were profuse, as were his generous offers to help his mother in the kitchen and to give gifts of toys and other items to his sisters. His sense of relief and happiness was palpable. He became, in a way, like Zacchaeus, the greedy tax-collector who, upon meeting Jesus, was brought to repentance and then joyfully insisted he would give half of his goods to the poor and repay fourfold anyone whom he had defrauded (Luke 19:1-10). Repentance made Zacchaeus happy to rid himself of the burdensome fruits of his sin.

This young boy’s sudden and evident change may not have been indicative of a full apprehension of the gospel, or of saving faith in Christ, or of the general repentance that always accompanies salvation, but it will hopefully be a lesson for him that will lead to this eventual outcome. It was, however, a clear illustration to warn us that coveting, committed in the heart, always sends fingers of evil to the surface.

This boy’s experience also illustrates the happiness that accompanies an unburdened conscience. My hope for him is that soon he will experience the joy of a completely unburdened conscience resulting from his confession of his utter sinfulness, to Jesus Christ who gave himself for all who would lay their sins on him and trust him for their salvation.

My hope is the same for you! Unburden your conscience to Jesus right now, and come to him for salvation. As he promised, “Come to me, all who labor and are heavy laden, and I will give you rest” (Matt. 11:28).