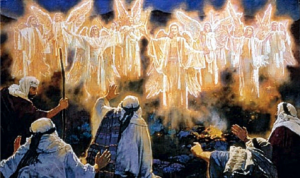 Angels appeared around the birth of Christ as shining messengers of God. For humble earthy shepherds given what might seem like a bit part in the drama of the redemption of mankind, this was, nonetheless, a spectacular scene. Angelic activity among men, when visible, is remarkable at any time. The stunning glory accompanying this message was augmented to fit the eternity-altering magnitude of its content. God celebrated his mercy.

Note first the other appearances of angels at the time of Christ’s birth, and then the one angelic display unique to the others which includes the lowly shepherds. These were the actual appearances, not dreams of angels speaking which happened to Joseph more than once.

“And in the same region there were shepherds out in the field, keeping watch over their flock by night.” (Luke 2:8)

Was it Gabriel who appeared to the shepherds on this mundane night? We don’t know for sure.

Gabriel is not called an archangel, such as Michael was, but he is obviously very prominent in the order of messengers of God. We might surmise that Gabriel was, in fact, the one chosen for this assignment since the other important messages from God about the birth of Christ were delivered by him.

Hebrews 1:14 reveals that angels are “ministering spirits sent out to render service for the sake of those who will inherit salvation.” Announcing the birth of the Savior would certainly be within this angel’s sphere of duty. These glorious beings, the most magnificent of God’s creatures, had no deceit, ulterior motive, or impurity and could be safely trusted to bring the exact message God himself wanted to be heard.

Here is the first level of glory. The angel “stood before them, and the glory of the Lord shone around” the shepherds, causing them to be frightened beyond description.

And the angel said to them, “Fear not, for behold, I bring you good news of great joy that will be for all the people. For unto you is born this day in the city of David a Savior, who is Christ the Lord. And this will be a sign for you: you will find a baby wrapped in swaddling cloths and lying in a manger.” Luke 2:10-12

The shepherds were the first to get the message on the day Christ was born! And they would be the first to see the baby outside of the family. This is stated with gravity and joy, but more glory is to follow.

Then, A Multitude of Angels

And suddenly there was with the angel a multitude of the heavenly host praising God and saying, “Glory to God in the highest, and on earth peace among those with whom he is pleased!” Luke 2:13-14 ESV

Remember, the first angel was standing before these humble and obviously befuddled shepherds. Did this multitude of angels stand as did the first one, or hover above them? We aren’t told. In Bethlehem there are undulating hills. Imagine these hills illumined with shining angels praising God and declaring this attribution of praise about God and an astounding declaration of peace with God for all people “with whom he is pleased” which followed the announcement of Christ’s birth.

All of a sudden the one magnificent Angel became an army, “a multitude of the heavenly host.” The “host of God” is the term for the army of God acting under his orders. The host of God was together voicing these words from God joyfully having just come from the presence of their commander and ruler of the universe with express orders to deliver it.

That often-repeated, half-sleepy vigil in the darkness now becomes the night of nights, the scene of scenes regaled by radiant angels sent directly from God. It was the earthly birth announcement of the King. If to shepherds it was astounding beyond anything they had ever known or would know, to angels it must have been even more so. Could they understand it? The eternal Son of God, whom they had served in heavenly places in majesty, had just come among men by means of a human/divine birth in a stable in order to live among men as redeemer for sinful humans. It was a display of mercy which was unimaginable prior to it happening, by both angels or humans.

Ennobled heavenly creatures sent from God and abased, mortified, and condemned men gazed at each other in amazement and shared the confounding glory of the Savior’s birth. Be astounded and rejoice with them.