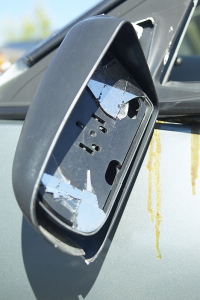 Considering the failures of others can promote your success. For example, do you not tend to slow down when you see the flashing red and blue lights of a police officer issuing a speeding ticket? Would you not walk more carefully if someone walking ahead of you were to slip and fall on an icy sidewalk? Avoiding trouble by contemplating the failures of others is common to the human condition, at least among the wise. As the proverb says, “The prudent sees danger and hides himself, but the simple go on and suffer for it” (Prov. 27:12).

In the Bible, God graciously describes the failures, and even utter downfall of some, as warnings to promote the ultimate success of others. Perhaps the clearest example of this is found in 1 Corinthians 10:6-12. In this passage Paul describes the sinful failure and eventual destruction of most of the Hebrew nation coming out of Egypt, unapologetically explaining that God ordained and recorded these events as examples to promote the success of believers in the present age. “Now these things took place as examples for us, that we might not desire evil as they did” (v. 6). “Now these things happened to them as an example, but they were written down for our instruction, on whom the end of the ages has come” (v. 11).

“These things,” as Paul explains, were God’s destruction of the Israelites who failed to exercise faith in submitting to God. He had miraculously delivered them from slavery, yet they gave themselves over to idolatry, sexual immorality, rebellion, and grumbling. Paul’s stated goal in relating these examples was to promote godliness among the Corinthians, warning them not to repeat the disastrous errors of the Israelites.

Elsewhere in the New Testament similar thoughts are expressed. For example, in Romans 11:22 Paul encourages his Gentile readers to “Note then the kindness and severity of God: severity toward those who have fallen [referring here to unbelieving Jews], but God’s kindness to you, provided you continue in His kindness. Otherwise you too will be cut off.” In his first letter to Timothy Paul reflects on the failure of Hymenaeus and Alexander who “made shipwreck of their faith” (1:19-20) as a means of encouraging Timothy to “wage the good warfare, holding faith and a good conscience.” In 2 Timothy, Demas, a former associate of Paul in spreading the gospel, is said to have departed from Paul, being “in love with this present world” (4:10; an implicit condemnation of Demas and warning against worldliness). In 2 Peter 2:20-22 we are warned of those who, like “the dog returns to its own vomit, and the sow, after washing herself, returns to wallow in the mire,” have given in to the temptation to return to their sin after having “escaped the defilements of the world.” Though no specific person is mentioned here, it seems evident that Peter had actual examples in mind.

Three sobering facts emerge from this line of thought:

First, we cannot help but recognize that in these biblical examples, those who experience ultimate downfall were known at some point as God’s people (i.e., professing Christians like Demas and the ones implied in 2 Peter, the Hebrews whom God had chosen for himself and rescued from slavery in Egypt, Hymenaeus and Alexander, who were apparently teachers in the church). Paul’s warning in verse 12—“Therefore let anyone who thinks he stands take heed lest he fall”—drives home this point: just because you think of yourself as one of God’s people now, don’t fail to take warning from these examples. Those who failed thought of themselves similarly.

Second, we recognize that disaster for one (or some) is not relegated to a total negative in God’s overall scheme of redemption. Rather, the downfall of one becomes, by the grace of God, the very impetus for another to make wise choices and course corrections through repentance and the reinvigorated exercise of faith.

Third, we are compelled to admit that the final chapters of our own lives are not yet written. Ask yourself, “What will my final example be? What will others write and say about me in years to come? Will my final chapter be a success story, or could it be written as a warning to others?” “He began well, but ended in spiritual tragedy.” “He showed encouraging signs of life at times, but was never able to shake the worldliness that eventually consumed him.” “He seemed so dedicated to the fellowship of the church, but then drifted away and grew cold.” “He was even a pastor, yet amazingly, through carelessness and secrecy, he returned to his sin.”

If your final chapter looks anything like this, God will be gracious to use it for the good of some who will hear of your failure, be warned, and respond well. In that sense, your disaster will not be wasted. But how much better to respond well to the final chapters of those who have gone before you—those whose disastrous end was ordained and described by God to bring about your success?