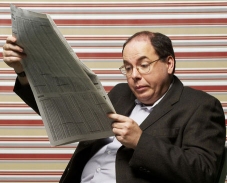 He could read it, but he didn’t.

Clifford Averill Foster went to Earl Buel Grade School in Drane County. He learned to read like all the others. He wasn’t the best reader—certainly not the fastest—but he could read. That’s the point.

Clifford read what was necessary in High School to earn him a “C+” grade point average. He read The Old Man and the Sea by Hemingway for English class. He read his science book and his history book, though he liked neither. He read the driver’s manual in order to pass the driving test for his license. He read The Lord of the Flies on his own, or at least most of it. He read the typed letter his dad set on his bed when he divorced his mother. He did that perhaps twenty times.

In community college he read for a “C” average. Not impressive, but it was not because he did not read what he was supposed to. He even read “King Lear” by Shakespeare, though his comprehension was minimal. From High School days until the day he died, he devotedly read the sports page of the paper. Never missed.

Back when he was in High School, tenth grade, Cliff says he was converted to Christ. He was part of the youth group of an average-sized church. At a retreat, the youth director, Marv Paley, discussed the meaning of Christ’s death with him. Cliff had been thinking about becoming a Christian. This was the time if it would ever be, he thought. He certainly believed he was sincere. So, he prayed a simple prayer that the youth director called, “the sinner’s prayer,” and later was baptized at the church building. His parents were happy; he was happy. Since that day, Cliff was much more faithful in the church. You would not want to say that Cliff was totally faithful, but his misses were a respectable number, and they were never frivolous. He would only miss if he were sick, or his son had a soccer tournament, or for hunting season, or something like that.

When he was converted, the youth director made a point to encourage Cliff to read his Bible. He had a modern translation which read easily enough, so he started out immediately. But after about ten days or so, at a rate of a chapter a day, reading became more sporadic, and finally ended.

Once, in college, the director of Christian Campus Ministry gathered some students together to teach them a six-week course on the basics of their walk with God. Cliff started eagerly, but missed the third, fifth and sixth meetings. He used his Bible once about a year after that, looking up some answers in the first few lessons for a fill-in discipleship book. Then, later, when he was around 34 or 35, there was an emphasis at his church which called for people to read the book of Mark together. He committed to do it and made it about a third of the way through.

That’s it. Clifford Averill Foster could read the Bible, but didn’t.

Years passed. Still no interest. He became a deacon in the church when he was in his forties. He could work with his hands and did some needed repairs on the building. He never really talked about God that much, and he only endured sermons, but he liked some of the people. He especially felt comfortable with those men who were just like him, real men who let their wives do most of the spiritual things. He was even somewhat more faithful now than in earlier days, with the exception of special days when his football team demanded his attention. He usually kept his mouth shut when he was in Sunday School class. He voiced few opinions about any passage of Scripture. He wasn’t shy, because he could talk about sports and weather well enough before the class. He just didn’t want to be embarrassed.

Finally he died and was buried. He went to hell . . . where people who don’t care about Jesus have always gone.