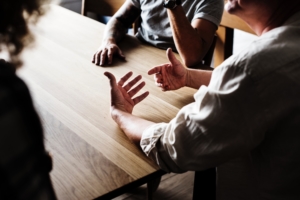 This instruction is near the end of Paul’s list of instructions for Christian living (Romans 12:9-21). The first part of the list clearly deals with interactions between Christians (vv. 9-13). The latter part primarily addresses the relationship of Christians to those outside the church (vv. 14-21). In that latter section Paul also says, for example, “Bless those who persecute you” (v. 14), “Repay no one evil for evil” (v. 17), “never avenge yourselves, but leave it to the wrath of God” (v. 19), “if your enemy is hungry, feed him” (v. 20), and “Do not be overcome by evil, but overcome evil with good” (v. 21).

In our present culture, where the depravity of man is increasingly evident in the insane confusion of right with wrong, good with evil, hate with love, truth with falsehood, and even male with female, a believer might be excused for wondering how we can be expected to live at peace with such people. Not only are we surrounded by increasingly bizarre displays of ungodly thought and behavior, but the people who have embraced the perversions of our culture genuinely believe their ways to be good and ours to be evil. Furthermore, they are often not satisfied to simply be left alone to practice their ungodliness. Through the pressures of social and mainstream media, believers are being force-fed the world’s propaganda, and punished when they refuse to swallow. We are even labeled in such instances as those who are disobeying the very Lord we earnestly seek to love and serve.

Though it may seem easier to take the monastic approach and just avoid the people of this world, that is not what we are called to do. You, the follower of Christ, must live and work and be neighborly and shine as lights, and all-the-while, as Paul says, “if possible, so far as it depends on you, live peaceably with all.” So how can this be done?

Seek peace before debate. You will often know when you first meet a person that your take on truth will not square with his/hers. If the first thing that person perceives from you is your disapproval and censure, or if you rush into discussing moral or theological issues because of your eagerness to evangelize, you will be facing an uphill battle for achieving peace—and it may be your fault! On the other hand, if the first (and ongoing) thing the person notices about you is the kind, respectful way you treat them despite your obvious differences, your prospects for peace and eventual evangelistic opportunity are much better.

Be slow to display offense taken. If you spend any time around the ungodly these days—on their turf, not yours—you will hear words spoken and subjects discussed that you would rather not hear. When this happens, you will be rightly offended on behalf of Christ, but how should you respond outwardly? You could react with a facial expression like you just smelled rotting road-kill, or you could let the person know in no uncertain terms that you do not appreciate their talk. These would not be ungodly responses, but they may not be the best way to achieve and maintain peace. Remember, the peace Paul has in mind depends on you, not them. Responding outwardly and obviously to offenses of this nature may not be worth burning the bridge of peace.

Be wise as serpents and innocent as doves.  Jesus said this to his disciples as he was sending them out “as sheep in the midst of wolves.” He followed this statement with “Beware of men . . . .” (Mark 10:16-17). I think he meant for them to be careful in their interactions with the ungodly, not in deceptive or harmful ways, but perhaps by being shrewd in terms of when and where they chose to reveal their beliefs, message and motive. After all, even Jesus didn’t answer every question he was asked, especially when he knew his enemies were looking to trap him. You, likewise, don’t always need to answer their questions or make your opinions known—especially on social media! Be respectful, but discuss on your terms, not theirs. It may be cowardice to live in peace because you are afraid to fight, but it is often wisdom to live in peace so that you can fight another day.