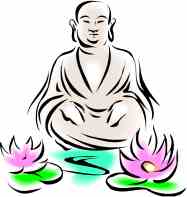 As the first watch of the night approached, a cross-legged figure, softly touching the ground so that Earth could bear witness, began to meditate. Above him, a giant pipal tree swayed gently in the wind. As his breathing grew steady, consciousness of previous rebirths and memories of former lives washed over him in a mighty wave. “Let my skin wither, my hands grow numb, my bones dissolve; until I have attained understanding I will not rise from here.” Morning had now come, and the 35 year old Indian prince arose. Siddhartha Gautama was no more; he had attained understanding; he was The Buddha—The Enlightened One.

Such is the teaching of the Buddhist religion.

Siddhartha Gautama was born around 563 B.C. in southern Nepal. Because there are no written records of his life, only a few details have survived and many of them are probably mythical. He was born into a rich family whose father was king of his clan. It is said that at the moment of his birth he took seven steps, announcing that this was his last rebirth and that he would be “chief of the world.” At age 16 he won himself a bride, Yasodhara, by performing many feats of mental and physical prowess. But, even with his wealth and lofty situation he was continually troubled by scenes of human suffering and pain—so much so, that, on his 29th birthday, he left his wife and children on a search for truth. For six years he wandered the world, experimenting with yoga, asceticism, and even starvation. Then, on the 6th anniversary of the beginning of his quest, he spent a night under the pipal tree. And for the rest of his life, he traveled, spreading his dhamma (teachings) about the way of enlightenment.

Enlightenment or nirvana is a state of mind free from desire. In Buddhist reasoning, all suffering stems from attachment to desires. You suffer loss because you loved, you suffer pain because you desire health, and so on. It therefore follows that, if you rid yourself of desire, you rid yourself of suffering. It is ironic that at the heart of Buddhism is the desire to be free from desire.

One can attain this state of nirvana by following the Eightfold Path. Its steps are Right Views, Right Resolve, Right Speech, Right Conduct, Right Livelihood, Right Effort, Right Mindfulness, and Right Concentration. In fact, the religion is up to its shoulders in rules such as these: 4 sets of rules for 4 great offenses, 13 rules required for formal participation in the brotherhood, 30 rules to curb greed and possessions, 92 rules for other offenses, 75 rules for proper behavior of novices who seek admission into the order, 7 ways of settling disputes, 227 rules for the male monk, 311 for the female, etc. If you do well enough throughout your lifetimes, you will achieve nirvana.

I mentioned “lifetimes” in the last paragraph, a concept connected to the Buddhist idea of rebirth and karma. When a person dies, he is reborn as someone else—not reincarnated in the Hindu sense of the word, but reborn. The difference is in the idea of self. A reincarnated person returns as himself in another form; a reborn person returns, but not with any real selfhood. To Buddhists self is only an illusion. Throughout this life, he will experience the consequences of his former lives. This is karma, the sum of good and bad deeds in previous existences. Karma is like a great wheel—either it will crush you or you will jump clear of its continual spinning through enlightenment.

Although it differs greatly from Christianity in the area of God and salvation, Buddhism stresses moralism. Jesus, in their mind, would have been an exemplary Buddhist. It is this element that makes it all the more dangerous. Moralism, in any form, without Christ, results in condemnation (Galatians 2:16).