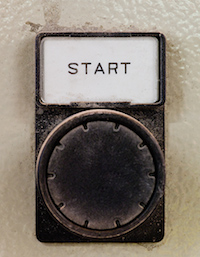 I understand that doubts can be a problem. But in the passage below, Jesus says there is something we must believe if we expect forgiveness for our sins.

Zoom in now and note carefully what Christ says about belief:

Belief in Christ may include many things, yet here is the starting place for all believers. If you don’t believe this, you are still in your sins. It may help us to see this in two parts.

We must believe that Christ is “from above.”

His origin wasn’t earthly. It is true and very important that we understand that though Jesus experienced a natural birth, his conception was not at all natural. The gospel writers make clear that Christ was born of a virgin named Mary. Jesus wasn’t the result of the union of Joseph and Mary, but the result of a miracle involving Mary and the Holy Spirit.

Note what the angel told Mary when she asked how she would be able to give birth to “the Son of the Most High”: “The Holy Spirit will come upon you, and the power of the Most High will overshadow you; and for that reason the holy Child shall be called the Son of God (Luke 1:35)”. The Bible specifically states “before they [Joseph and Mary] came together, she was found to be with child by the Holy Spirit” (Matthew 1:18).

The virgin birth of Jesus indicates that Jesus’ origin was in heaven. He lived there before taking on a human body in Mary’s womb. John, in his gospel account, quotes Jesus’ highlighting this heavenly origin numerous times. Jesus was different than you and me: He is from above. Do you believe this?

We must believe that Christ is God.

“Unless you believe that I am He, you will die in your sins.” The word “He” has been provided by the Bible translator in italics to show that it is an implied meaning. Some translations do not have it. Others add notation to indicate that it may be translated without the pronoun. I stand with many scholars who would say that this is a direct reference to a similar statement in the Old Testament in Exodus 3:

Then Moses said to God, “Behold, I am going to the sons of Israel, and I will say to them, ‘The God of your fathers has sent me to you.’ Now they may say to me, ‘What is His name?’ What shall I say to them?”

Because John references “I AM” various ways in his gospel account, and because Jesus had just said in the surrounding passage, “if you knew Me, you would know My Father also,” I believe this is a Jesus’ way to say that He is the God of the Bible.

The pre-incarnate (before coming in the flesh) Christ appeared as “the angel (messenger) of the Lord” in this Exodus experience in the beginning of Exodus 3. Moses saw a bush burning at Mt. Sinai while he was a shepherd in Midian. The text reports that the angel of the Lord was in the bush, yet this messenger or angel immediately begins to address Moses as God himself. “I am the God of Abraham, Isaac, and the God of Jacob.” We see this pattern repeated many times in the Old Testament. It shows that the Old Testament pre-incarnate messenger, the true eternal Son, was God.

In other words, Jesus was saying that these Jews must believe that Jesus not only came from God, but also that He is the same in essence as God. This same affirmation is at the beginning of John’s gospel account:

This is the most foundational belief of those who say they follow Christ. It must be believed.

As you continue in the Bible, you will see that “believers” actually believe all of God’s words. They are reconstituted as those who accept truth—who recognize the words of God and follow. They are tuned to His frequency when God draws them to Himself, and will continue to be for all of eternity. But these first words of belief test whether you are a believer or not, just as they did for those Jews long ago. Fail to believe here and you are still in your sins. Think deeply about whether or not you believe them, and whether your belief is that authentic and profound belief that affects your forever.