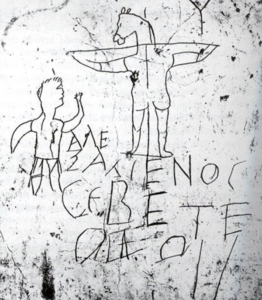 There is a very old bit of graffiti scrawled onto a plaster wall in Rome. It’s a crude sketch of a naked man hanging on a stick-figure cross. The man has the head of a donkey. To the left stands another man who looks up at the crucifixion with his hand raised. In case we misinterpret the scene, the graffiti “artist” has been kind enough to etch in a caption in Greek. It reads: “Alexamenos worships [his] god.” Apparently, the man with the donkey’s head is Jesus and Alexamenos is a Christian. This 3rd century work of “art” is meant to be a mockery.

That image illustrates an important fact: Jesus’ death did not gain him the reputation of a hero.

Everyone loves a heroic death. We love the soldier who holds off the enemy while his comrades escape. We applaud the father who jumps into the rushing river to save his child. We are inspired by the nurse who contracts a fatal disease while caring for the sick. These are truly wonderful stories that the Romans loved as much as we do.

But Jesus’ death was different because Jesus died on a cross. In the Roman world, crucifixion was the kind of death reserved for slaves and criminals. It was intentionally brutal and degrading. The public exposure, cruelty, nakedness, and lack of burial all were an announcement: “this is a worthless person.” That’s why a free Roman citizen would not be crucified. He merited more respect than that.

According to Cicero, “cross” was a word that should not even be mentioned in polite company. I wonder if the Roman would have experienced a similar kind of revulsion upon hearing the C-word (or S-word, since it starts with S in Greek) as we may experience today when we hear other derogatory expletives. To hear one slave say to another, “may you be crucified” would scandalize the Roman as much as certain lewd cursing scandalizes us.

So it’s no wonder that the message of the cross was stupidity to the Romans. Just to think that the Divine Creator would enter the world to be C-d was both disgusting and laughable. “You’re telling me that that is the hope of the world?” We might imagine similar responses to the early evangelists.

Yet this is the kind of death that Jesus chose, and by it we learn something about true self-sacrifice. Consider what Paul wrote to the Philippians about Jesus’ example of humility:

“[Jesus], although he existed in the form of God, did not regard equality with God a thing to be held onto, but emptied himself, taking the form of a slave, and being made in the likeness of men.” (Phil 2:6-7)

This is the first step of Jesus’ humility: he gave up his status, his place of importance, his rights to respect. He went from the exalted position of equality with God to the lowly position of a slave. He surrendered his reputation.

That would be remarkable enough, but the second step is almost unbelievable:

“Being found in appearance as a man, he humbled himself by becoming obedient to the point of death, even death on a cross.” (Phil 2:8)

What amazed Paul is not just that Jesus died, but that it was “even death on a cross.” That’s because it was a humiliating death. It wasn’t heroic or inspiring to them, the kind of act that people would talk about with respect or make into movies with emotional soundtracks.

No, Jesus chose to be associated with something uncomfortable, even revolting and shameful. He knew that people would scoff at it and think it was stupid. He even knew that one day he would be depicted naked with the head of a donkey. And to think, he gave up his status as God for that.

Greater love has no man than this: that he lay down his life for his friend. Every act of self-sacrifice is an act of great love. But Jesus, in his self-sacrifice, shows us the greatest expression of great love, because Jesus laid down not only his life, but his reputation.