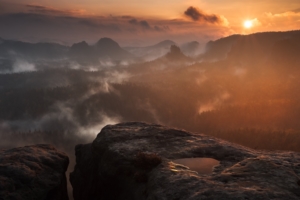 Bible reading isn’t for the fainthearted. There are complexities and difficulties in most books that can leave us scratching our heads and asking, “Now why did God say it that way?” or “It sure would have been nice if that verse came with some inspired footnotes!” Thankfully, the main truths about God and the death, burial and resurrection of Jesus Christ are abundantly clear and accessible, even to the beginning Bible reader.

However, there are certain passages that present us with a potential problem or what seems to be a contradiction. For example, consider the following verses from 1 Samuel 15.

“The word of the Lord came to Samuel: ‘I regret that I have made Saul king, for he has turned back from following me and has not performed my commandments.’” (vv 10-11)

“And also the Glory of Israel will not lie or have regret, for he is not a man, that he should have regret.” (v 29)

“And Samuel did not see Saul again until the day of his death, but Samuel grieved over Saul. And the LORD regretted that he had made Saul king over Israel.” (v 35)

Running into these kinds of issues in Bible reading can be discouraging, but let me assure you—you are your biggest problem when this happens. I’m sure you’re feeling better already. What I mean is this: the text of Scripture is absolutely trustworthy and without contradiction, and so when we seemingly find something that does not fit, it points to a deficiency in us rather than the Bible. When we conclude after reading the three verses above that the Bible is wrong or corrupt or that God is incapable of communicating clearly, we are acting like a child hanging upside down on the playground and concluding that everyone else is wrong side up.

Our assumption when reading the Bible is inerrancy and coherence. This is the Christian way, following after the Lord Jesus himself. We approach the Scriptures for what they are, the revelation of God for us.

So did the Lord regret that he made Saul king or not?

The technical word for what is going on in 1 Samuel 15 is “anthropomorphism”—ascribing to God human characteristics or behaviors. The complexity of God’s relational character towards people can only be understood if he describes himself in a human way with human characteristics. This helps us comprehend what is being said, but it also limits description because of how unlike us God is. For instance, if you described your spouse using only the characteristics of a dog, you may be able to get somewhere, but it wouldn’t be very complete. Well, she’s loyal and kind and waits for me at home and is excited when I arrive. That may be true, but there is obviously much more!

When the idea of regret comes up after Saul disobeys the commandment of God, the author is helping us understand the relational sadness God was experiencing. In this way we understand that the Lord was filled with sadness and regret at Saul’s disobedience (v 10-11). But in order to make sure that we don’t misunderstand something about the Sovereign God of the universe that does all that he pleases and knows the end from the beginning, verse 29 tells us that God is not like man, and therefore does not regret decisions like men because all God’s decisions are perfect and good.

God does not wish that he would have done it differently in the same way we do when we mess it up, because God does not mess up. We rightly understand these statements as a reference to how God responds when people, especially his own people, reject him and walk in disobedience. He is sorrowful. But because God is sovereign, he is sorry about this event that he chose to bring about. God knew Saul would disobey before it happened, but he made him king anyway.

When we regret something it is because we did not expect the sad results. When God regrets, he fully knows and expects the sad results. This means that God would not do it differently with Saul if he got the chance, and that is a significant difference from how humans regret that deserves the explanation of verse 29.

God always does just what he wants, and in the case of Saul, the way in which he acted ultimately ended with a man from Judah named David being King. Genesis 49:10 says that the scepter would not depart from Judah, meaning the coming King would come from that tribe, not Benjamin (the tribe of Saul). When God chose to make Saul king, he was planning to make good on all his promises through David, and Jesus who would follow after, because the Glory of Israel does not lie.