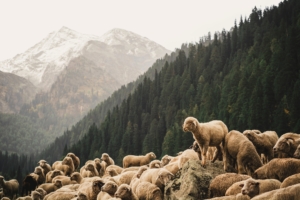 I once heard a man read the above verse and ask, “When does a sheep become a sheep?”

The question is a good one, and has importance in the dialogue in John 10.

Jesus had been talking with Jewish leaders who were not buying in to his viewpoint — especially his claim that he was the Christ. “If you are the Christ, tell us plainly,” they said.

Then he states very plainly why they did not believe him — “you are not of my sheep.”

Is Jesus saying that some people are his sheep before believing? It appears to me this is exactly what he is saying.

In fact, Jesus said something similar earlier in the chapter. He had just told the Jews around him that he was the “good shepherd” who lays down his life for the sheep, which is clearly an allusion to the cross. Pay attention to his words because they include you:

I have other sheep, which are not of this fold; I must bring them also, and they will hear my voice; and they will become one flock with one shepherd” (John 10:16)

He has other sheep who haven’t yet been brought into his fold? Yes, the sheep who “are not of this fold” is a way of talking about Gentiles. Fifty days after Jesus will die, on the day of Pentecost, the door will be opened wide to Gentiles to believe in Christ. He calls those who will believe, “sheep.”  And, he already has them!

What Has He Said Again?

Let’s put it all together:

To make it personal, if you are a Christian, Jesus considered you to be his sheep before you believed, he then died for you before you believed (or were even born), and then he brought you to himself, causing you to hear his voice and believe. At this point he added you to the very large flock of his believing sheep who will experience eternal life together with him.

What do we see is necessary then for your eternal salvation:

If any one of the above is missing, you cannot have eternal life. It’s important to understand, however, that you cannot know #1 and #2 is so until you experience #3.

Rejoice in the Mystery

I admit, it is a mystery as to why one person would be considered one of his sheep, and another not be so. However, we know Christ said it and meant it. None of us would wish to deny that, I’m sure.

I think it is far better to rejoice in it. Don’t be like these Jewish leaders who later picked up stones to throw at him.

It may seem unfair for Jesus to talk like this, but he did, and many times. The truth is, all of us, Jew-born or Gentile-born deserve to die in our sins, separated from God forever. But in his mercy he has chosen to have a huge flock of sheep he will tend for eternity.

If you are one of those, scratch your head, wonder why you were chosen, and rejoice in God’s amazing mercy and his mysterious plan.