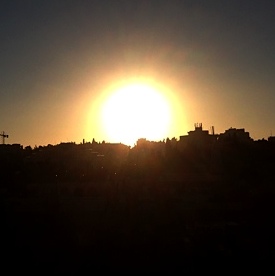 In an exchange, there is always something gained and something lost. On my recent trip to Israel this meant that I had to surrender my dollars to gain shekels. If I wanted to buy souvenirs and Turkish coffee, the money had to be changed.

One of the most haunting refrains in all of Scripture is, “God gave them up.” In Romans 1:18-32, this phrase is used three times to describe God’s action toward a humanity that refuses to acknowledge Him. This action, however, is clearly described as a response to an exchange. Humans exchange the truth about God for a lie. They trade the fact that God is the sovereign creator who is worthy of worship for the idea that idols should be receiving glory instead. The creator is put aside so that images of things created can be honored. God’s action shows us that He gives up people who decide that He didn’t create the universe, that He is not the possessor of eternal power, or that He does not even exist.

For all of our talk about the unmatched love and acceptance God offers, we can easily forget His righteousness—he will always do what is just and right.

So what is the exchange rate for God? To answer that we need to look at God’s action toward a people who refuse to acknowledge Him as He has revealed, people who trade the truth for a lie. When people give up on God, He gives them over to their own desires. What results is a heart of lust that sexually dishonors (v. 24), the degrading of the natural sexual pattern though unnatural passions (v. 26), and a mind that is so debased it invents evil (v. 28, 30). The cost of denying God is enormous. This result is the present state of God’s wrath against ungodliness and sin, and an honest review of history would show that this wrath is real. Lust has destroyed kingdoms, unnatural homosexual passion was the downfall of Sodom and cyanide based pesticide meant for bugs was repurposed to murder countless Jews in the Holocaust.

While working at a restaurant a few years ago, I remember a little girl who really loved her chocolate milk. She was downing it glass after glass, and each time I refilled the cup I looked at her father for approval, and he would give the ok. He let her drink a large amount of chocolate milk, so much that I thought she might get sick—and then she did—all over the floor. It was a mess, and she was bawling her eyes out. What she needed all along was restraint, because her passion for the chocolate milk was bound to get out of hand. What she received was release to do as she pleased. She should have been happy after getting all that she wanted, but she was sick instead.

The picture Paul paints for us in Romans 1 is not one of a negligent father, but one of rebellious children who clearly know about God and reject Him anyway (vv. 19, 21). The result is, however, the same. God gives up unrighteous people to their own foolishness and futility.

How then are we to think about our current generation? Is it one characterized by the idea, “they did not see fit to acknowledge God?” (v. 28). This is when God gives up. When an individual, family, community, or society rebelliously decides to stop honoring God, there is no reason to think that they will escape futile thinking and foolish hearts (v. 21), resulting in the wrathful release of God (v.24). The very opposite assumption should be made. In the same way that God does not change, His response to sin does not change. Therefore, as long as creation continues to cry out, “A powerful, knowable, and creative God exists!” the saying remains true, “They are without excuse,” (v.20).

In this world of no excuses, God is either restraining sin or releasing it, and the latter has all manner of negative consequences. Another shocking display of evil greets you each time the nightly newscast invades your screen. This is news because it is, at least partially, novel. It is different than what happened in your neighborhood that afternoon where no one was killed or raped. God is restraining for now, but he will not hold back forever.

The most frightening verse in the whole chapter comes at the end, “They [people who do not acknowledge God] know God’s decree: that those who practice such things deserve to die,” (v. 32). Paul goes on to say that those who continue in a lifestyle of sin are storing up wrath for the day of wrath, when God will reveal his righteous judgment, (2:5). On that day the consequence for denying God will be a giving over into eternal punishment in hell, rather than temporal futility here on earth.

What exchanges have you made? Do you believe and live in step with the truth that God is the righteous creator worthy of all glory and praise? Or, are you practicing things worthy of death and giving approval to others who do the same? To trade God is to gain a lie that results in all manner of evil and sin and ends in eternal death—the price is too much.