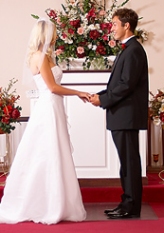 Weddings are celebrations of love, of commitment, and of hope for the future. But they are also a time to recognize and celebrate newness, even the newness of creation. When you attend a wedding you are witnessing three brand new things:

First, you are witnessing the establishment of an entirely new family. Much is often said at weddings about parents not losing a son, but gaining a daughter, or not losing a daughter, but gaining a son. These are true sentiments in the sense that “in-law” relationships are formed through marriage, and existing family relationships do not altogether cease. But the family relationship that Scripture focuses on when speaking of marriage is the brand new family that is established. This new family relationship—the one that replaces all others in occupying the highest position of priority and commitment—is described in Genesis chapter 2 where we read, “a man shall leave his father and his mother, and be joined to his wife.” Though unstated in Scripture, it is also true that the woman who marries leaves her father and mother and is joined to her husband.

The two words, “leave” and “join” tell us that marriage initiates a dramatic change in relationships. The groom formerly lived under the headship of his father. But in being joined to his wife, he leaves that behind to become the head of his own new family. This is no small step, because it comes with a sobering combination of independence, responsibility, and accountability to God. The bride formerly lived under the protective headship of her father, but she now leaves to be joined to her husband. This is no small step for her, because it requires her to humbly and trustingly submit herself to his protective authority and headship just as she would submit herself to Christ.

Secondly, you are witnessing the visible illustration of God’s creation of a new and permanent invisible union. At weddings, the bride and groom state their vows of commitment to each other, they exchange rings, and someone officially pronounces them husband and wife. But there is more going on at a wedding than what is visible or audible. As marriage becomes a reality in all these external and civil ways, God is doing His own invisible work.

As the Lord Jesus said of a husband and wife in response to the Pharisees’ question as to whether or not divorce is lawful, “They are no longer two, but one flesh. What therefore God has joined together, let no man separate.” This “one flesh” union consists of more than a signed certificate, promises made, or even physical intimacy. In the mystery of God’s activity—the invisible realm that we can only perceive and understand through the words of Scripture—God Himself creates something new. He joins the two together in a permanent union that is dissoluble only by death. So when a bride and groom say, “until death do us part,” or “as long as we both shall live,” they should not presume that their promises make their union permanent. Rather, if they are thinking biblically, they should be promising to conduct themselves in keeping with the permanence of what God Himself is creating in their union.

Finally, you are witnessing the first moment of the couple’s new obligation to fulfill God’s highest purpose for marriage—to reflect the glorious relationship between Christ and His church. In Ephesians chapter 5 Paul repeatedly instructs husbands and wives to relate to one another in ways that are likened to the way Christ relates to His church, and the church to Him. “Wives, be subject to your own husbands, as to the Lord.” “Husbands, love your wives, just as Christ also loved the church and gave Himself up for her.” His obvious point is to inform us by way of comparison that God’s design for marriage is to reflect the relationship of Christ with His church.

Paul goes on to quote from Genesis 2 about the institution of marriage, but then makes it clear that he has a higher aim in giving his instructions about marriage than just to produce happy marriages:

For this reason a man shall leave his father and mother and shall be joined to his wife, and the two shall become one flesh. This mystery is great; but I am speaking with reference to Christ and the church.

Marriage does provide the benefits of companionship, contentment, fulfillment, and personal happiness, but it is not ultimately about these things. It is ultimately about reflecting the gospel of God’s grace in Jesus Christ, and the godly response of the church to that grace.

Unmarried people are not tasked with fulfilling this unique obligation, because only married couples can do so, in their relationship with each other. It is an altogether new purpose for them, as well as a new privilege, and it is the most important reason for them to marry.