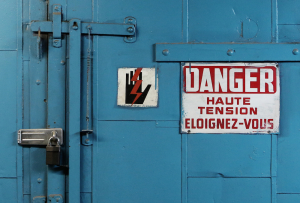 Why do the writers of Scripture promise sure salvation for believers, but then warn those same believers not to fall away from the faith and be lost? It’s a fair question, after all, because if something cannot happen, why caution someone against allowing it to happen?

Let me start with what I will call “assurance passages”—promises to believers about the certainty of their salvation:

For God so loved the world, that he gave his only Son, that whoever believes in him should not perish but have eternal life. (John 3:16)

All that the Father gives to me will come to me, and whoever comes to me I will never cast out. (John 6:37).

Truly, truly, I say to you, whoever believes has eternal life. (John 6:47)

For I am sure that neither death nor life, nor angels nor rulers, nor things present nor things to come, nor powers, nor height nor depth, not anything else in all creation, will be able to separate us from the love of God in Christ Jesus our Lord. (Rom. 8:3-39)

These promises are unequivocal, providing solid assurance for those who believe: If you are a believer, your salvation is certain.

But there are also what I will call “warning passages” in Scripture, clearly addressed to believers. These passages caution believers against falling away from the faith and being eternally lost.

Take care, brothers, lest there be in any of you an evil, unbelieving heart, leading you to fall away from the living God. (Heb. 3:12)

For it is impossible to restore again to repentance those who have once been enlightened, who have tasted the heavenly gift, and have shared in the Holy Spirit, and have tasted the goodness of the word of God and the powers of the age to come, if they then fall away, since they are crucifying once again the Son of God to their own harm and holding him up to contempt. (Heb. 6:4-6, also see 10:26-31)

For if, after they have escaped the defilements of the world through the knowledge of our Lord and Savior Jesus Christ, they are again entangled in them and overcome, the last state has become worse for them than the first. For it would have been better for them never to have known the way of righteousness than after knowing it to turn back from the holy commandment delivered to them. What the true proverb says has happened to them: The dog returns to its own vomit, and the sow, after washing herself, returns to wallow in the mire. (2 Pet. 2:20-22)

As much as it might perplex us, the Bible contains both—assurances of salvation and warnings about falling away. But again, why the warnings? If a true believer cannot fall away from the faith (which the assurance passages affirm), what’s the use of cautioning him against allowing it to happen (as do the warning passages)? There seem to be two reasons:

First, the faith described in Scripture as leading to salvation is a faith that endures to the end. Any supposed “faith” that fades away—any temporary faith—was never saving faith at all. There is no biblical promise of salvation to the person who believes, but later abandons his initial faith in Christ, perhaps due to cultural pressure, persecution, or love for the things of this world. This reality was taught by Jesus, Paul and other biblical authors.

Brother will deliver brother over to death, and the father his child, and children will rise against parents and have them put to death, and you will be hated by all for my name’s sake. But the one who endures to the end will be saved. (Matt. 10:21-22)

For we share in Christ, if indeed we hold our original confidence firm to the end. (Heb. 3:14)

Given the necessity of endurance, the warnings to persevere make perfect sense.

Secondly, warning a true believer to persevere in his faith does not imply that a true believer could actually fall away from the faith. The warning is God’s gracious way of ensuring that His promise of salvation is kept for that person.

Think about it: If a true believer hears or reads a biblical warning about the necessity of perseverance, how will he respond? He will heed the warning! God’s Spirit in Him brings about this kind of response. By heeding the warning, the true believer ensures that his faith will endure to the end, leading to final salvation. God’s promise is kept! On the other hand, if a professing Christian hears, but does not heed, the same warning, and as a result falls away from the faith, no biblical promise of salvation for this person has failed, since the biblical promises of salvation only apply to those whose faith endures to the end.

So, you profess faith in Christ and you enjoy the biblical promises about the certainty of your salvation. But how do you respond to biblical warnings?