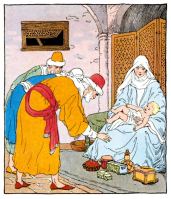 Have you ever been to a baby shower? A baby shower is a party where friends and family bring gifts to welcome a new baby. Can you think of some gifts that would be good to bring to a new baby?

I went to a baby shower a few weeks ago, and people brought diapers, tiny pajamas, baby bottles, rattles, and other toys. What would you think if someone brought air freshener? Would that be a good gift for a baby shower? How about some smelly medicine? Would the mom and dad be happy to get that as a gift? Would you give a baby a gift of money?

A long time ago some very wise men decided to bring gifts to a baby. They had studied the stars and somehow God had shown them that a baby had been born who would be a great king. They knew that if they followed the new star that had just appeared in the sky, they would find Him. Never before or after has God caused a star to appear to announce the birth of a baby. Nothing was more important to these men than seeing the baby whom the star announced. The wise men knew that something different was happening, something that would change the world.

They left their warm beds and their families and began traveling west, bringing gifts for the baby king. One gift was frankincense, which is made from hardened tree sap. Frankincense was mixed with spices and burned to make the room smell good, like an air freshener. They also brought myrrh, another kind of hardened tree sap. Myrrh was used to make a smelly kind of medicine that people believed was good to cure many sicknesses. The last gift was gold, which people used for money in that time. All these gifts were presents fit for a king, the very best gifts the wise men could offer.

After a long journey, the star led the wise men to Bethlehem, where they found the baby king living in a house with His parents. They worshipped Him and gave their gifts to his parents. This special baby was Jesus, God’s only Son. Jesus’ mom, Mary, and her husband, Joseph, welcomed the wise men and remembered all that they said about the way God showed them how to find Jesus.

Did you know that God has shown us a way to find Jesus, too? Just like the wise men who left everything to go look for the new baby, the Bible says we should search for Jesus with our whole heart. That means that knowing Jesus should be the very most important thing to us, even more important than our families and our homes. Of course, Jesus isn’t a baby any longer, and he doesn’t live in a house we can go visit, but we can learn about Him in the Bible. We can pray to Him and know that He hears us. We can trust Him to take away our sin, and just like the wise men, we can give Him gifts that please Him, like our obedience and worship.