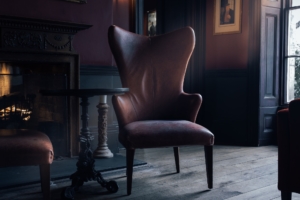 Sometimes the hope of Christmas is, “Next year all our troubles will be miles away.” That’s what the song says anyway, but many will not have a merry Christmas just because of that. They know it is not true. Many start with and cannot get past the empty chair—where their husband used to sit, where their daughter used to climb, where grandma used to stand to reach up high. Sure, the stores have been visited, and the goodies consumed, but joy will not be unmixed this season because someone isn’t there. Death has come and cast its shadow upon Christmas.

Lurking in this shadow is the great beast, despair—slithering through the house as the family arrives, waiting for an opportunity to steal your joy. Satan loves to use good memories to bring pain. The fond remembrance of how it used to be can become a sea of sadness because it will never be just like that again.

I can still remember Christmas as a boy and teenager when my grandpa was alive. He would read from the Bible and pray, and some years would surprise the family with interesting gifts that he wanted to keep at his house after you opened them. Unforgettable. He is easy to miss, and it is not uncommon for the tears to flow while remembering how it was before he died. But he did die, and so did your sister, cousin or father. And people only die once, so they are not coming back. Let the weight of death affect you.

I’m sure you have tried to lift it, and maybe you feel like this time of year is another opportunity to hopelessly carry the burden. The heaviness of death that Christmas has the tendency to bring is the reason Jesus came. After his birth, the murderous Herod called for all children around Bethlehem under the age of two to be killed because he could not find out exactly where Jesus was staying. Jeremiah prophesied, “A voice was heard in Ramah, weeping and loud lamentation, Rachel weeping for her children; she refused to be comforted, because they are no more,” (Matt 2:18). This is the world that God entered, a world of horrifying fatality. A world that was broken and lost, estranged from God and spiraling downward into the murky depths of hell.

Into this blackness, the true light broke when God became a man. “Mild he lays his glory by, born that man no more may die, born to raise the sons of earth, born to give them second birth.” Jesus came to bring new birth, bind up the broken-hearted and release the captives. He came because sin reigned in death. Both spiritually and physically, death had reign, and then Jesus came to beat down the old king. He was born so that “as sin reigned in death, grace also might reign through righteousness leading to eternal life through Jesus Christ our Lord,” (Rom 5:21). When Jesus came that man no more would die, he brought tidings of great joy. Grace has arrived!

Because death no longer rules, true joy cannot be swallowed by storm clouds of despair. This does not mean that there will be no tears this Christmas—that reality is still to come. “He will wipe away every tear from their eyes, and death shall be no more, neither shall there be mourning, nor crying, nor pain anymore, for the former things have passed away,” (Rev 21:4). The former things of this glorious future are still our earthly reality today. So we long for the end, the second advent of our Lord.

Jesus came and provided rescue from sin and life eternal. Because death no longer rules, songs of a trouble free next year are not our hope. They don’t even make sense. Trouble is here, and it is coming again to you and your family, but a humble man from Nazareth has lifted the burden of death from your shoulders, and is coming quickly to wipe all tears away. Our hope at Christmas is the One who experienced death to conquer it – forever.