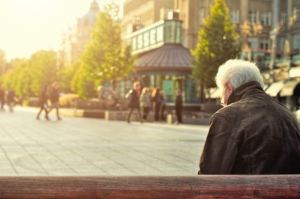 Now therefore give me this mountain of which the Lord spoke in that day. And Joshua blessed him, and gave Hebron to Caleb the son of Jephunneh as an inheritance (Joshua 14:12-13).

Does God love his children when they become old? Must Christians who have served the Lord faithfully for many years slide quietly into oblivion, or may they continue to be inspired for active and successful service for the Lord? The case of Caleb proves the latter, for this courageous man at the age of 85, filled with wide-eyed ambition, wanted to succeed in life.

In the second year after the Exodus, Moses sent a dozen spies into the land of Canaan to look the land over and report back (Numbers 13). One of these was Caleb. Along with Joshua, he was not only profoundly impressed with the beauty and fruitfulness of this land, but was convinced that with the Lord’s help, the Israelites could conquer it.  After all, God had long ago promised Canaan to the nation Israel as the place of their permanent dwelling.

At the time of their excursion into the land of Canaan, Caleb was forty years old. In that trip through the land, he saw a section of land which had a special appeal. He was attracted to the mountainous region around Hebron where tradition had it that the patriarch Abraham, along with his wife Sarah, had lived. For Caleb, not only did this spot stand out for its historic antiquity as the burial place of Abraham, but was a mountainous region especially useful for the cultivation of fruit trees and vineyards.

This spot, some 3000 feet above sea level, had been promised to Caleb when he asked it from Moses.  And now 45 years later, as the Israelites triumphantly entered the land promised by God, Caleb boldly solicited what he felt was rightfully his from Joshua, the successor of Moses. “I want this mountain,” he cried out.  And Joshua, a man of God, honored the promise given to Caleb. Caleb then set about to take over this region as the dwelling place for his family, and his descendants.

Caleb was now 85 years old. Even in earlier Bible days, when people tended to live longer, this was an age when most people were retired from the struggles of life. But this son of Jephunneh felt more than able to go forth to serve the Lord and establish his foothold in the wonderful spot he chose. He and Joshua, after all, were the only ones who had believed the land could be taken when ten of the spies perished in the wilderness with all the other unbelieving and idolatrous Israelites. And Caleb felt physically able for the task ahead. “As yet I am,” he confidently affirmed, “as strong this day as on the day that Moses sent me” (Joshua 14:11). Evidently the old man was blessed with good health, or if this was not the case, the veteran did not wish his infirmities to get him down.

It may be that the abilities and experience of older saints is the greatest untapped potential in the churches today.  Too many people have been removed from service in the Lord’s church simply because they are older. And how many times have you heard churches disparaged because too many “gray heads” were visible.  Sadly, many godly believers, feeling unwanted in the churches they built and supported, quietly moved aside because they had been born too soon.

Senior citizens who love Jesus should be inspired by the example of Caleb, by his faith and courage. For Caleb, the land he first desired as a much younger man of 40, even though filled with huge, ferocious warriors called the Anakim, faced a formidable task for an octogenarian. But he took on the job.

He trusted God to keep his promises, and went to work doing God’s will.

And so should we.

John F. Thornbury is an octogenarian himself, and still active in ministry. He has authored several books, such as one of our favorites, God Sent Revival, on the life of Asahel Nettleton of the Second Great Awakening.