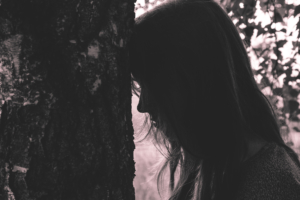 “Great thoughts of your sin alone will lead you to despair,” said the beloved 19th Century London pastor, Charles Spurgeon. He ought to know. He had excruciating bouts with depression. “I know the borders of despair and the horrible brink of that gulf of darkness into which my feet have almost gone.”

But read the quote again:

“Great thoughts of your sin alone will lead you to despair, but great thoughts of Christ will pilot you into a haven of peace. The weight of my sin presses down on me like a giant’s foot would crush a worm, but oh, it is but a grain of dust to Him because He has borne that sin on the cross.”

Despair, melancholy, depression, sadness, sorrow, regret—we all know something about this giant who goes by many names. And some face him to a degree almost beyond toleration. Often (but not always) the heaviness of sin is at the root of such despair.

We are no match for such a giant as the relentless memory of foolish disobedience.

As believers who still sin, we know this:

It is that last issue that is the most unappreciated by God because it implies there is something inadequate in Christ’s work on the cross, as if He did not pay for sins en toto.

As a true believer, what should you do if Giant Despair is bludgeoning you with former sins?

Be sure you have repented of that sin. Repentance is hating what you once loved, and rejecting what you once craved. It is a change of mind that effects behavior. The believer lives in the world of repentance. “The sorrow which comes from God,” said the apostle Paul, “produces repentance, without regret, leading to salvation [deliverance]; but the sorrow of the world leads to death.” (2 Cor. 7:10)

Have “great thoughts of Christ.” This is what Spurgeon learned-and practiced! Christ has already taken the punishment of that sin for you. Have enough sorrow to be sick of the sin, but not so much sorrow as to make nothing of what Christ has done on the cross. When you are convinced enough to despise it, then sorrow has done its work. Throw off nagging thoughts and go on.

Christian, God does not appreciate us acting as though Christ did not die. Your sin demands a fresh application of faith, a resting on this solid truth. Believe what He told you about the effect of Christ’s death for your sins. Have “great thoughts of Christ.” In Christ, you are as forgiven as you can be!

Your sin “is but a grain of dust to Him because He has borne that sin on the cross.”

“Surely He has borne our griefs and carried our sorrows . . .”