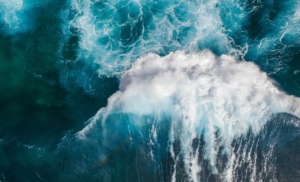 As Luke told the story about the opening moments and early hours that Jesus hung on the cross (Luke 23:32-43), he especially highlighted something about Christ’s character—his love. This trait of Jesus is especially noteworthy when observing that all around the cross, sin was rampant.

One example of the sinfulness around the cross is seen in the behavior of the soldiers. Luke says they “cast lots to divide his garments” (23:34). While the innocent Savior died just a few feet away, they were oblivious to him. Instead, they pursued material gain through this “executioner’s perk.”

Additionally, certain soldiers “mocked him, coming up and offering him sour wine and saying, ‘If you are the King of Jews, save yourself!’” (36-37). Verbal abuse wasn’t limited to the soldiers but also came from the rulers (35) and “one of the criminals” (39). The soldiers’ mockery also included giving “King” Jesus the cheap wine, not the finest wine that “real” kings got.

Even the people who were simply watching in the background were guilty. Though Matthew and Mark say that there were spectators who yelled insults at Jesus (Mt 27:39-40; Mk 15:29-30), Luke only notes that “the people stood by, watching” (Lk 23:35). Some might have been weeping (cf. vv. 27-28), but probably most were just curious bystanders, fascinated by the spectacle. As Jesus had said earlier in Luke, they were missing “the time of (their) visitation” (19:44). The Messiah was among them, but they treated his life and death like an entertaining show.

In fact, everyone around the cross of Jesus rejected the idea that he was the Messiah. They thought that if he really was “the Christ of God, his Chosen One” (35, 39), if he really was “the King of the Jews” (37) as the inscription said above his head (38), then he should save himself (35, 37, 39). They were lost in the sin of unbelief, blinded to the truth that the only way he could save others was by not saving himself.

Against this dark backdrop of depravity beams the love of Christ. Not only was his death as a substitute for sinners an act of love, but his loving heart is demonstrated before he dies in at least two ways.

First, Christ’s love is seen in a prayer he prays.

He prayed, “Father, forgive them, for they know not what they do” (34). The “them” that he prayed for was at least those soldiers who were responsible for crucifying him, though he may also have had in mind anyone present who, to one degree or another, participated in his crucifixion. Perhaps you have heard someone say about this prayer, “Look at how forgiving Jesus was.” But he wasn’t forgiving anyone at this time. He was praying that God the Father would be merciful to his enemies.

This prayer demonstrates Christ’s love for his enemies. Sometimes, when we’re just tired, we’ll think unkindly about even our friends. But on the cross, as Jesus was dying an agonizing death for sinners, he was praying for his enemies, even the murderer who drove the nails through his hands!

Jesus loves even the worst sinners. J.C. Ryle comments on this prayer: “The vilest of sinners have no cause to be afraid of applying to a Savior like this. If we desire warrant and encouragement to repent and believe—the passage before us surely supplies enough” (www.gracegems.org/Ryle/l23.htm).

Second, Christ’s love is seen in a promise he makes.

Two criminals were crucified next to Jesus. They both reviled Christ (cf. Mt 27:44). But at some point, the eyes of one criminal were opened to the truth about Jesus, and he believed. He only had one request: “Jesus, remember me when you come into your kingdom” (v. 42). Christ’s response? “Truly, I say to you, today you will be with me in Paradise” (v. 43).

When a believer dies, he goes to Paradise—a place of rest and happiness. Christians dwell there with the Lord until the second coming of Jesus. This was far more than the one criminal was hoping for. When he said, “when you come into your kingdom,” he had the distant future in mind, but Jesus responded by saying something like, “You’re thinking about something too many days away. I want you to think about today. This very day, you will be with me in Paradise!” He could say that because of what he was accomplishing on the cross—conquering sin and the grave.

As he endured excruciating physical pain and faced God’s justice, Jesus still engaged this man, delivered him from condemnation, and promised him Paradise. This is the love of Christ. Most would have said it was too late for this man, and that he was too far gone. Jesus thought differently.

All around the cross were sinners, but the Christ on the cross was a loving Savior. And note this carefully: the resurrected Jesus is equally loving toward all who come to him today—even the vilest sinners. Like the one criminal, why don’t you renounce your sin and trust in him right now?