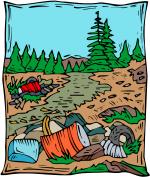 Where I live in western Missouri, spring and summer are intensely green. The Missouri River valley is wet and steamy—almost tropical. The forests and fields, threadbare and vacant during the winter months, by mid-spring appear as solid walls of trees and vines.

Just outside of the town where I live, on a beautiful country road, are a number of stately homes surrounded by forests and farmland. During the warmer months, natural vegetation renders several of these homes nearly invisible from the road. If one slows down to take a look, the properties appear almost Eden-like. Were it not for my awareness of the millions of ticks and thousands of copperhead snakes that call these lush properties home, I would think they were, well, perfect.

One winter day, however, as I was driving past one of the most beautiful of these estates, I saw something through the thinly-garbed winter forest that I would have never been able to see during the summer: a pile of junk! Next to a frozen creek, on the same property as this beautiful home, were old broken chairs, discarded lumber, and rusty pieces of twisted metal. There was even some plain old trash, the kind that comes from your kitchen!

What occurred to me next was that this pile of junk was there all along. The thick greenery of spring and summer had concealed it from view, but it was there. This beautiful property, one that had so often drawn my admiration, had a great big ugly spot.

Jesus once dealt with some men who were a lot like this beautiful property. He said to them,

Woe to you, scribes and Pharisees, hypocrites! For you are like whitewashed tombs which on the outside appear beautiful, but inside are full of dead men’s bones and all uncleanness. So you, too, outwardly appear righteous to men, but inwardly you are full of hypocrisy and lawlessness (Matthew 23:27-28).

These men prided themselves on their external righteousness and outward respectability. But each one had a great big ugly spot—the heart. No one else could see the filth concealed there. It was hidden under a thick carpet of religiosity, pomp, and ceremonial righteousness. But it was nevertheless there all the while.

Jesus saw it plainly. In fact, He exposed it. Just as the harshness of winter removed the covering of leaves to reveal the pile of junk on that property, the harshness of truth exposed what these men really were—a brood of vipers, hypocrites, liars, and murderers.

Before you get too wrapped up in judging those Pharisees, examine yourself. Like them, you were born with a pile of junk in your own heart. You may have grown up in a nice home, a nice town, a nice family. You may even be a member of a nice church. Your life may appear quite nicely put together to people who observe as they pass by. But the ugliness you were born with could still be there just the same.

Have you seen it? Have you come to the winter months? Have the leaves and vines of self-righteousness and deception fallen to expose the true nature of the heart you were born with—the heart that loves sin and self, the heart that wants nothing to do with the righteousness of God?

Many religious people, even some professing Christians, have grown accustomed to seeing this as a description of everyone else’s problem, but not their own. What about you? Have you come to realize that your own heart is an ugly spot? Have you realized that it naturally produces nothing but sin (cf. Mark 7:20-23)? Have you been humbled by the fact that God sees your pile of junk plainly (cf. 1 Samuel 16:7)?

As Jesus said, “It is not those who are well who have need of a physician, but those who are sick. I have not come to call the righteous, but sinners to repentance” (Luke 5:31-32).

The truth is, if you have never seen your own pile of junk, your heart remains as it always was.

Pray that winter will come soon.