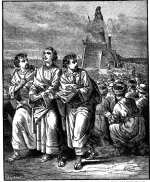 Three young men were faced with the ultimate choice: deny God by worshiping a graven image, or be burned alive. This was the decree and threat from the Babylonian king Nebuchadnezzar recorded in Daniel 3, and it compelled the following response from Shadrach, Meshach, and Abed-nego:

If it be so, our God whom we serve is able to deliver us from the furnace of blazing fire; and He will deliver us out of your hand, O king. But even if He does not, let it be known to you, O king, that we are not going to serve your gods or worship the golden image that you have set up. (Daniel 3:17-18)

Let’s take a look at the faithful response to persecution from a biblical perspective, using the response of Shadrach, Meshach, and Abed-nego as our example.

The enemies of God attempt to produce unfaithfulness by threatening severe consequences for faithfulness.

Threats of death, imprisonment, financial persecution, legal consequences, social ridicule, and family rejection, are hurled at the faithful in hopes that they will be unfaithful. The people of the world threaten you because they want you to be just like them—to fit in, to conform, to value what they value, and to worship what they worship.

The world utters and carries out these threats because to them, avoiding these kinds of consequences is the most valuable prize they can imagine. “Who in their right mind would willingly suffer the loss of money, popularity, or even life for the sake of faith in Jesus?” they wonder. What they don’t realize is that their mind is the one that is not right, and that they are the ones who will experience true loss. As Jesus said,

Whoever wishes to save his life will lose it; but whoever loses his life for My sake will find it. For what will it profit a man if he gains the whole world and forfeits his soul? Or what will a man give in exchange for his soul? (Matt. 16:26)

The world fails to see that the highest possible price they can demand is cheap by comparison.

Our faithful response to the world’s threats is motivated by our confidence that God is able to deliver us.

Here’s how the three young Hebrews responded to Nebuchadnezzar’s threat:

“Our God whom we serve is able to deliver us from the furnace of blazing fire.” (Dan. 3:17)

When we trust in such a God as this—all-powerful and therefore able to deliver us from any earthly danger as He wishes—we can move forward with confidence even when the prospect of deliverance is totally obscured.

Our faithful response to the world’s threats does not depend on the certainty of deliverance.

Shadrach, Meshach, and Abed-nego first stated their confidence in God’s ability to deliver them, but then they said,

But even if He does not, let it be known to you, O king, that we are not going to serve your gods or worship the golden image that you have set up.” (Dan. 3:18)

God delivered them, even though the heat killed the men who threw them in. Their clothes didn’t even smell like smoke when they came out. But many who are faced with the ultimate choice are not delivered, being required to pay with their lives for their faithfulness. Think of Stephen (Acts 7) and James (Acts 12). Think of Jesus Himself. Think of the young man in Tunisia recently beheaded by Muslims because he refused to renounce his newfound faith in Christ. This same price is being paid daily by faithful followers of Christ all over the world. Others are imprisoned or expelled from society, subjected to fines, political sanctions, family rejection, or social ridicule.

Where is the God who is able to deliver in situations like these? As Shadrach, Meshach, and Abed-nego knew full well, He is right where He has always been: in control, causing all things to work together for the good those who love Him, “to those who are called according to His purpose” (Rom. 8:28).

I say to you, My friends, do not be afraid of those who kill the body and after that have no more that they can do. But I will warn you whom to fear: fear the One who, after He has killed, has authority to cast into hell; yes, I tell you, fear Him! (Luke 12:4-5)