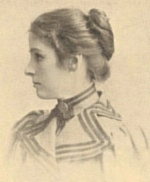 Eleanor Chestnut was born in Waterloo, Iowa, in 1868. Her father left the family about the time Eleanor was born. When she was three, her mother died, too, leaving her in the care of neighbors. Eleanor grew up knowing that she was a charity case and a strain to her adoptive family’s resources. And as she grew, so did the gnawing resentment she felt over her situation.

When Eleanor was 12, she moved to the small town of Hatton, Missouri, into the care of relatives. There was no extra money for extravagances like a high school education for an orphan girl, even one with a fine mind like hers. But somehow, Eleanor heard about Park College and Academy, a school with a work-study program that would allow her to earn her way through both high school and college. She wrote to the president of the school, Dr. McAfee, explaining her situation. “Come to Parkville,” he replied, and that’s exactly what Eleanor did.

Friends later described Eleanor as odd, forlorn, unapproachable, proud and eccentric when she arrived at Park. She was 15 years old, had very little money, and was forced by necessity to wear clothing donated for poor students. She accepted this with resentment, and because of the assault to her pride, could not feel any gratitude. She was one of Dr. McAfee’s “problem students”—outwardly brave and quiet, but inwardly troubled and unhappy. “Nobody cares where I go or what I do,” she said. “It makes no difference about me.”

Park College was a firmly Christian institution in the 19th century, with a familial atmosphere. The Parkville Presbyterian church worked hand in glove with the school to insure that the students had good teaching in not just the sciences, but also in the Bible. The students went to chapel three times a day, and were expected to attend church. Though no record remains of the particulars of her conversion experience, we know that Eleanor joined the church during her eight years at Park, and, more importantly, we have a record of the gradual change in her character that is a sign of true faith. The painful experiences of her childhood, instead of causing bitterness, now caused her to have great sympathy for others who were suffering.

Eleanor graduated from Park in 1888 and enrolled in the Women’s Medical College in Chicago. Her dream, perhaps inspired by some of the speakers in the college chapel, was to become a medical missionary. Her poverty continued as she began her training; she lived in an unheated attic and cooked her own meals—mostly oatmeal—and nearly starved that first year. She worked as a nurse during the summers to pay her expenses.  Interestingly, she cared for Oliver Wendell Holmes Sr. in his last illness.

After medical school, Eleanor briefly attended Moody Bible Institute in preparation for life on the mission field, and in 1894 she sailed to her first post in China. The timing was terrible. China was experiencing social upheaval. Drought and famine ravaged the land, and the people looked for reasons the gods were punishing them in this way. They fixed the blame on Western influences, and especially Christian missionaries. In the Boxer Rebellion of 1900, 189 Christian missionaries and 2,000 Chinese Christians were martyred. Eleanor stayed at her post as long as she could, saying, “We might as well die suddenly in God’s work as by some long, drawn out illness at home.”

As the country reached an uneasy peace with missionaries at the end of 1900, Eleanor was once again reduced to poverty, this time voluntarily, as she donated all but a meager $1.50 per month of her support to buy bricks to build a women’s hospital in Lien-Chou. She road on horseback to neighboring villages to hold clinics and to explain the dangers of the custom of foot binding. She translated helpful books into the local dialect, trained nurses, and helped in the school and in the church.

Eleanor was well-loved for her kindnesses, but there was great pressure to do everything well. Any spark could ignite a riot and possibly end the evangelistic efforts in Lein-Chou. Eleanor wrote home, “Every patient that I lose counts so much against the work here.” Perhaps that’s one of the reasons she was so worried about an amputee whose wound was not healing as well as she had hoped. The boy needed a skin graft to help the flaps of skin cover the end of the stump.

Quietly, with no one to assist her, Dr. Chesnut injected a local anesthetic into her own leg, removed a large section of skin, and grafted it onto the stump of her patient, who went on to heal nicely. Eleanor treated 5,479 patients in her last year in China, and each posed a risk.

On October 29th, 1905, a spark did indeed start the riot the missionaries had been trying so hard to avoid. A dispute arose between some Chinese officials and the head of the mission station about a shed erected on hospital property that was being used for idol worship during the festival of All Souls Day. The missionary insisted the shed be removed. The Chinese officials appealed to the crowd. Eyewitness reports describe how the missionaries were chased into the streets and beaten. Dr. Chesnut was able to slip away in the crowd, but returned to plead for her missionary friends, some of whom had been in the country only 48 hours.

Her pleas fell on deaf ears. In a moment of calm during the riot, she performed her last act of kindness toward the Chinese people. Eleanor tore her dress to make a bandage for a boy in the crowd with a head wound. Witnesses said that she worked “with skilled, kind fingers that did not tremble.” She was ready to give her life for Christ. After selflessly serving in China for 11 years, Dr. Eleanor Chesnut was beaten and then stabbed to death with a pitchfork. Three other missionaries and a ten-year-old child were also murdered.

It seems an inglorious end to her life of sacrifice—such a waste.

But back home, the story of the courage of the missionaries caused others to wish to follow in their footsteps. The church decided to redouble their missionary efforts in Lien-Chou. Several men stepped in to take over the work. Funds were raised for the mission as a memorial to the martyrs, and in 1907 Dr. Elizabeth Carper arrived to administrate the women’s hospital in Dr. Chesnut’s place. In 1915, 300 believers worshiped at the Lien-Chou church. The work went on, and we still remember the courage God gave to little orphan girl from Waterloo, Iowa.

Photos and reference documents courtesy of the Fishburn Archives, Park University, Parkville, Missouri, with our special thanks to Carolyn Elwess, Archivist.