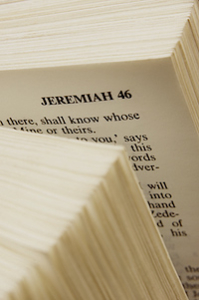 I’m risking sounding old-fashioned, uninventive, or the promoter of something that “just won’t work these days,” but here’s my conviction: We should read even large sections of Scripture when the church meets.

Throughout the Bible, God expected His people to hear His word read publically, and we have a few instances of that actually happening. Here are most of the references to relevant passages and verses I have discovered, with some brief comments. I hope you’ll read each passage or verse:

Exodus 24:3-7 – The first public reading of God’s word in the Bible happens after God gave Moses the law.

Joshua 8:30-35 – Once in the Promised Land, the Israelites first were defeated at the city of Ai (7:1-5), but with God’s help they then were victorious over that city (8:1-29). Then Israel renewed their covenant with the Lord and Joshua read God’s law to the entire assembly of Israel.

2 Kings 23:1-3 and 2 Chronicles 34:29-32 – During King Josiah’s reign in Judah, the high priest, Hilkiah, “found the Book of the Law in the house of the Lord” (2 Kings 22:8). He gave it to Shaphan, the King’s secretary, who read it. Shaphan then read God’s law to Josiah. The King then read God’s word to “all the men of Judah and all the inhabitants of Jerusalem and the priests and the prophets, all the people, both great and small” (23:2).

Nehemiah 8:1-8 – After returning from the Babylonian exile and finishing the wall around Jerusalem, the people asked Ezra to “bring the Book of the Law of Moses that the Lord had commanded Israel” (v. 1). Ezra then read God’s law to the people “from early morning until midday” (v. 3). Explanation accompanied the reading (v. 8).

Luke 4:16-17; Acts 13:15; 15:21 – Scripture reading was a staple of the synagogue meetings, which provided a strategic opportunity for Jesus and Paul to preach the gospel.

Colossians 4:16 – Paul not only wanted his letter to the church in Colossae read to all of the believers in that town, but he told them to read it to the church in Laodicea. As an apostle of Jesus Christ, he knew his word had authority beyond a typical letter of that day.

1 Thessalonians 5:17 – Paul used the strongest language possible to ensure that his letter was read to all of the believers in Thessalonica. They had an ongoing responsibility to obey what Paul taught them by word or by letter (2 Thess. 2:15).

1 Timothy 4:13 – While on his way to Macedonia, Paul left Timothy in Ephesus in order to confront false teachers and to strengthen the church. In a culture of people turning away from Christ “by devoting themselves to deceitful spirits and teachings of demons,” Paul commanded Timothy in this way: “Until I come, devote yourself to the public reading of Scripture, to exhortation, to teaching” (4:1, 13).

Revelation 1:3 – Blessing is promised both to the one reading Revelation out loud to a group of people and to those who hear it read orally and respond appropriately (cf. 22:18).

God’s word has been read publically, even at length, throughout salvation history. But what benefits would there be in reviving this practice today? Here are five: