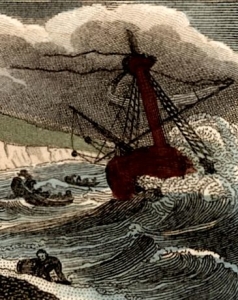 At one point in Pilgrims Progress, Christian and Hopeful seemed to have reached the bitter end. Giant Despair had thrown them into the dark dungeon of Doubting Castle. The two travelers had gotten off the true Way for a while and had been captured by the evil giant for trespassing on his land. From Wednesday morning to Saturday night they sat in darkness and despaired of life.

The situation worsened when, at the counsel of his wife, Giant Despair beat them horribly so that they could not even roll over. The next night he told them to kill themselves before he tore them limb from limb himself. In the shadow of death, the two pilgrims had to decide which way to die. They were out of options, pressed hard from all sides, without hope and in the dark—at their wits end.

Some went down to the sea in ships,
doing business on the great waters;
they saw the deeds of the Lord,
his wondrous works in the deep.
For he commanded and raised the stormy wind,
which lifted up the waves of the sea.
They mounted up to heaven; they went down to the depths;
their courage melted in their evil plight;
they reeled and staggered like drunken men
and were at their wits’ end.

The sea is fierce, and when it mounts up to heaven, the crew on a wooden vessel knows that it is not going to hold up. Picture these scrambling men, the crashing waves and the salty spray pounding the deck. The intermittent lightning strikes reveal glimpses of wide-eyed panic frozen on their faces. These men have no hope; nowhere to go but down.

You’ve been there too, pacing the house in a cloud of anguish looking for a way out of the current calamity. If relief exists, you can’t think of it. The cancer has not gone away, your family or church is in shambles, your child has not come back home, your estranged spouse will stop at nothing but divorce, and you are desperate.

Christian and Hopeful felt this way on Saturday, after three days of cruel imprisonment. You might think that they took the giant’s advice and did themselves in, but instead they began to pray. All night until the break of day they prayed, and when day came, Christian remembered a special key called Promise around his neck that could open the dungeon door. The two prisoners escaped.

The staggering sailors realized that they were at the mercy of Almighty God and “they cried to the Lord in their trouble, and he delivered them from their distress” (v. 28). The storm abated, and the sailors found safety.

Mark this down: the Lord hears and answers the cries of desperate people. Over and over again in the Bible, people are needy and God is ready to deliver at their word. Some were in trouble because of their sin, others because of natural disaster, others were enslaved by evil men, but they all equally felt their need of God.

Sometimes you are so disoriented in the midst of trials that you cannot even conceive of hope. Your mind cannot formulate a way in which the current situation is going to turn out for good. If you haven’t been there already, you will be some day. And when you come to your wits’ end, remember that you are not at God’s. He is not reeling, and He has not left you alone in the dark stormy night. Cry out to Him.

Jesus has been there too, languishing before his Father without worldly hope or a way out of the pain. He wept in the garden, and will wipe your tears. He felt the pangs of affliction, and He’ll calm your fears. When your portion is the darkness of death, He has been there already. He suffered alone, so that you never have to.

Whoever is wise, let him attend to these things; let them consider the steadfast love of the Lord. Psalm 107:43