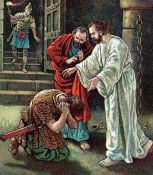 An Encouraging Story for Christian Children from Acts Chapter 16

Do you ever feel like complaining? Some children complain about doing chores, or about having to get up in the morning, or when their brother or sister gets a special privilege

or treat that they don’t get. Let me tell you a story from the Bible about some men who had very good reasons to complain, and what they did instead.

A long time ago—after Jesus died and rose again and went back to live in heaven—two men named Paul and Silas traveled to the city of Philippi. They came to tell people the good news that Jesus died to take away the sins of everyone who would trust Him, and that the Philippians could live forever in heaven if they became followers of Jesus.

Everywhere Paul and Silas went in the city they told the good news, and people followed them to listen. One person who followed them, though, didn’t listen at all. When Paul and Silas were trying to teach, she would shout, “These men are workers for the Most-high God, who are telling you how to be saved.”

You can imagine how distracting that would be, can’t you? (Think about what your mom would do if you shouted, “You are teaching me good things” every time she tried to talk to you.) In fact, the Bible says that it was a demon causing her to shout. This was a wicked plan to keep people from thinking about what Paul and Silas were teaching, even though what she shouted was true. The demon also helped the slave girl tell fortunes to make money for her owners.

The Bible says that Paul was greatly annoyed that people were not able to listen to the good news without this distraction. He turned to the girl and said to the demon that had possessed her, “I command you in the name of Jesus Christ to come out of her!” The demon obeyed and the girl stopped shouting, but she also lost the ability to tell fortunes. Her owners were angry that she couldn’t make money for them any longer.

As angry people sometimes do, the owners complained! They dragged Paul and Silas before the courts and told the rulers that Paul and Silas were throwing the city into confusion. The crowd watched as the rulers of the city had Paul and Silas beaten with bundled sticks and thrown into the darkest room in the prison. Their legs were locked into wooden stocks so they couldn’t move around.

Do you think Paul and Silas had good reason to complain? They were trying to help people by telling them the good news, and instead of saying “Thank you,” the people were mean to them. Paul and Silas had sore backs and were chained so they couldn’t move. They were in jail and didn’t know when they would be free again. They didn’t have a soft bed or a warm blanket. They could have been very grumpy about all the nasty things that had happened.

I’m happy to tell you that wasn’t the case—Paul and Silas were not grumpy at all. They prayed and sang hymns of praise to God from that deep, dark jail cell. All the prisoners in the jail listened to them and wondered how they could be happy in such an awful situation. They didn’t know what Paul and Silas knew—that God makes all situations work out for good for the people who love Jesus. Paul and Silas were trusting God, waiting to see what He would do, and at about midnight, something wonderful happened!

Suddenly, there was a great earthquake. All the doors of the jail opened and everyone’s chains fell off. The jailer woke up from his sleep and saw all the doors open. He was so worried that he would be put to death for letting the prisoners escape that he was about to kill himself with a sword. But Paul cried out, “Do not harm yourself, for we are all here!” The trembling jailer asked Paul, “What must I do to be saved?”

God wants us to trust Him when we have difficult days, just like Paul and Silas did. When my sons were little, their dad and I wanted to surprise them with a trip to their favorite amusement park. We got them up early one Saturday morning, and they complained. We asked them to get dressed to go out, and they complained again. We got in the car, and they complained about the trip. They kept complaining until we turned into the parking lot of the amusement park and they understood where we were going. How do you think they felt then? When they understood the good day we had planned all along, they were very happy and very sorry for complaining!

Just like my boys, sometimes we complain about situations that are really blessings. But if we are followers of Jesus, we can know that everything that happens to us is for our good. Like Paul and Silas, we can trust God, rejoice, and wait to see what good thing is going to happen next.