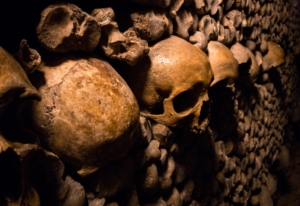 In his classic book, The Cross and the Switchblade, David Wilkerson remembers his transition from pastoring in rural Pennsylvania to evangelizing the teenage street gangs of 1950s New York City. One gang, the Mau Maus, figures prominently in the book because of its unusual hardness and violence. These young boys were no strangers to fighting and even killing. During this period, they had even declared war on the Brooklyn police and had made several unsuccessful attempts to drop 80-pound sandbags on patrolling officers below. The vice-president of the group was named Nicky, a known knife fighter who had stabbed 16 people.

Then one day, David Wilkerson became a witness of the supernatural. As he spoke about the good news of Jesus with these teenagers, Nicky was changed. “I’ve given my heart to God,” he said. After giving them Bibles, Wilkerson went home to bed. The next morning, he received a call from the police station. The Mau Maus had come to make peace. They even asked the officers to sign their Bibles! Nicky continued on to become a life-long believer and servant of Jesus.

When I think about this story, I have to ask myself: Do I believe that this kind of transformation is possible? For my neighbors, my family . . . even for myself?

Ezekiel prophesied during a time of national despair. The Judahites had committed religious adultery against Yahweh, they had profaned his name among the nations, and, in consequence, they had been spewed out of their homeland into exile. Hope was gone. They were cut off.

Yet God gave Ezekiel a vision of transformation. He showed Ezekiel a valley. And strewn across the valley were piles of broken, dried skeletons. No sound could be heard but the wind sweeping across the forgotten fragments of a mass grave.

“Can these bones live?” God asked.

God told Ezekiel, “Prophesy to the bones.” As Ezekiel began to speak, another sound became audible. A sound of rattling, the hollow sound of bone hitting bone. Soon Ezekiel was facing an army of standing skeletons.

Then Ezekiel looked again. Sinews and muscles were growing over the bones and skin was beginning to cover the muscles. Now, standing in front of him, row upon row, was an army of dead people.

Can these people live?

God told Ezekiel, “Prophesy to the wind.” And as Ezekiel spoke, a wind flowed into them and became breath in their mouths. They had become a living army.

Then God interpreted the vision for Ezekiel.

In this vision, the skeletons represent a people who are dead because of their sin and its consequences. They are cut off and have no hope. Yet God demonstrates that these people can live. With a careful word play (the word “wind” and “Spirit” are the same in Hebrew), the text teaches us that the wind that animates this army of the dead represents a life-force that can revive any who are dead because of sin—namely, the Spirit (or “wind”) of God.

With God’s Spirit, radical transformation is possible. Do you believe this? It’s possible for your acquaintances, your family, your coworkers . . . even for yourself. God’s Spirit is like a wind that invisibly and amazingly infuses life into even the driest bones. “This is the way it happens,” Jesus said, “with everyone who is born of the Spirit” (John 3:8).