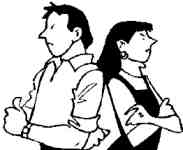 Kevin had been abused by a babysitter as a child.

The first years of marriage were difficult ones. Things were just not working out. Kevin and Christiana separated for nine months while they considered divorce. But somehow they managed to reconcile.

On the surface, the marriage looked better after this. They got their first “good” jobs, making “good” pay. By purchasing a new home, new cars, eating out in fine restaurants and taking nice vacations, they kept things going for a while as they tried to climb the ladder materially. However, things were not as they seemed.

“Each worldly accomplishment seemed more anti-climactic than the one before,” lamented Kevin. A lifetime of attempting to sooth his hurting soul only left him a practical “idolater with deeply ingrained sinful habits.”

Though Kevin and Christiana tried church life for awhile in their journey, it did not satisfy. Kevin was struggling with deep sexual sins. His thought life and addiction to pornography led him into several episodes of adultery. His marriage was imploding.

When Kevin finally confessed all of this to Christiana, she tried to forgive. But as the weeks went on “her hurt turned to anger and bitterness and forgiveness seemed to be an impossibility.” Their second separation began.

Just at this point, when things seemed the worst, something happened that altered everything.

In his loneliness and despair, Kevin now sought a relationship with Christ in earnest. He went to the Bible to find answers for his dilemma. He built Christian relationships and listened to leaders who could help him understand life and how to know Christ. He talked things out with those who knew what being a Christian was about.

Everything changed. He found a true relationship with Christ during his darkest hours. Through Christian teachers who loved him, Kevin even got the help he needed to deal with his addiction to pornography and the life of lust he had known. “Even as I write this,” he once admitted, “I can feel fresh waves of horror wash over me as I recollect the wicked creature that I had become.” But God changed him through Christ and the care of the real Christians he had met. They accepted him and helped him.

Christiana, though not a believer in Christ herself, saw the difference in Kevin. He moved back in once again. Together they attended a church. Though she had attempted to relate to Christ as a child, an experience that soon faded away, she soon came into that vital union with Christ that would transformed both her life and her family.

“I truly believe that I have been converted. Although I am an infant in Christ,” she now confesses, “I have a true passion for Him. I am so grateful to God that this change has occurred now, while my children are still young. I could have missed teaching them about a real God while they were in their formative years. I’m so grateful that God has surrounded us by so many biblically sound Christians who can help us and our children grow. I am also thankful and amazed at the difference this has made in my relationship with my husband.”

You can see the difference in their love for each other and their completely new direction in life. They have a fresh start with assurance of a good ending.

Could this same thing happen to you?

Many people only pretend to be Christians, but merely playing the game of church will not transform anyone’s life or marriage. Yet, with Christ, the most debilitating and destructive behavior can be reversed. More importantly, mere pretense will not bring forgiveness of sins from God, nor will it assure you of eternity in heaven.

What Kevin and Christiana found is only available through an authentic relationship with Christ.

Here is what you need to know:

God had revealed His will for you in the Bible. Reading the New Testament, especially the books of Matthew, Mark, Luke and John, is a good place to begin. Just as Kevin diligently sought help from the Bible, you may do the same. Answers are there for those who seek. Because you will not understand everything you read, God has provided teachers and leaders to help you as well. Find a church where the Bible is seen in the hands of those who attend, a church where people believe that becoming a Christian is all about God’s grace to change your life.

God is in the change business. Because those who become true believers in Christ put their focus on following Him, family members can “come together” in Christ. It has happened thousands of times. But if this does not happen for all your family members immediately or at all, know that the best thing you can offer your family is to be a true Christian seeking to be what God wants you to be. It all starts when you begin seeking a relationship with Christ.

“Truly, truly, I say to you, he who hears My word, and believes Him who sent Me, has eternal life, and does not come into judgment, but has passed out of death into life.” (Jesus, in John 5:24)