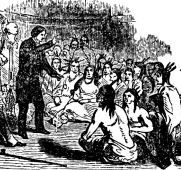 David Brainerd died well. “Now that I am dying,” he said, “I declare that I would not for all the world have spent my life otherwise.”1 His brother John was convinced. He carried on David’s work until his own death 34 years later.

David and John Brainerd were born two years apart, the seventh and eighth of nine children born to Dorothy and Hezekiah Brainerd of Haddam, Connecticut. Like most of their neighbors, the Brainerds were staunch Puritans. The children were raised to be respectful to adults, conscientious in their duties and passionate about God. Regular attendance in corporate and family worship and solemn participation days of fasting and prayer were normal and expected in their family.

Hezekiah died when David was 9 years old, and Dorothy passed away 5 years later. The older siblings looked after the three younger ones until David (later John and finally his youngest brother, Israel) left for Yale. All three boys dreamed of becoming pastors. Even at this young age, David was often ill with symptoms of the tuberculosis that would end his life.

John followed David to Yale in 1742, the same year David was expelled from the school over a careless comment about a teacher, made during a private conversation and repeated by someone who overheard. David apologized, but the administration was determined to make an example of him. They wouldn’t reconsider their decision, even when some of the most prominent religious leaders of the day tried to intervene. John reluctantly continued with his studies at Yale, and David left in disgrace. His dreams were shattered.

But God works in mysterious ways. Some sympathetic pastors licensed David to preach, and then a mission board in Scotland commissioned him as a missionary to Native Americans in 1742. After spending the winter preaching in a white settlement, he left to live among the tribal people in April 1743.

David chronicled what happened next in his journal. He often slept on the ground with only a thin blanket for covering. Loneliness and the lack of Christian fellowship were oppressive to him. He was almost always depressed and ill, yet still he labored faithfully with great love for his people. He constantly prayed and consistently fasted asking God first to make him a holy vessel, and then to grant power to his preaching. God answered his prayers. Revival broke out among the Native Americans. By the time David was too ill to continue his work in 1747, there were over 130 new converts living in a Christian Native American settlement in New Jersey.

When David realized that he would be unable to continue shepherding “his little flock,” he arranged with the mission board in Scotland for John to take over. During David’s final illness, John was able to visit and give reports concerning the new church. Jonathan Edwards wrote, “When he [David] spoke of his congregation of Christian Indians in New Jersey, it was with peculiar tenderness, so that his speech would be presently interrupted and drowned in tears.”2 And so with the flock he loved in the hands of the brother he loved “best of any creature living,” David died on October 9th, 1747.

Just before David died, he entrusted his diary to Jonathan Edwards, who edited it and added his own summary notes. The work has been in print since it was first published in 1749 and has inspired a countless number of believers, including John Wesley, Jim Elliot, William Carey and Robert McCheyene.

By the time David’s diary was first published, John was busy ministering to about 160 Native Americans living in their own town of Bethel, New Jersey. More than fifty of the town’s children were enrolled in the school that he established. He made long trips on horseback to other tribes, using interpreters to teach the gospel. He urged the new converts to move to the settlement in Bethel, where they could be under his pastoral care.

John also established scattered “preaching points” where the white settlers could gather to hear him preach, much like later circuit riders. While laboring full-time among the Native Americans, John established seven churches for settlers and frequently visited seven other towns.3

John married and was widowed and married again. He lived to see the white settlers sue to move his Native Americans from their land and to see the entire area captured by the British, who burned down his home and his church. During his many travels he suffered at the hands of horse thieves and from exposure to the elements, along with all the expected disappointments and trials of the pastorate. But still he loved his “flock in the wilderness” and remained faithful to his calling. John Brainerd died at the age of 61 in Deerfield, Connecticut, in relative obscurity, but his legacy, like that of his brother David, continued. A later biographer said, “He lives in tradition by the wigwam fires of the far West Indians; he is worthy also to live in the literature of the church.”4