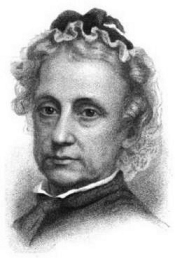 It was an awful thing for anyone to watch, but especially difficult for a sensitive eight year old girl. Elizabeth’s father was in great pain as he suffered with tuberculosis. First it was the constant, wrenching cough. Then his stamina failed and he had to give up preaching. Finally Edward Payson was confined to bed, and they knew that the end was near.

In all this, Payson’s faith never wavered. He trusted God’s plan for his own life and for his family. In fact, by the end he said he had no will at all in the matter of living or dying. He wrote, “There can be no such thing as disappointment to me, for I have no desires but that God’s will be might be accomplished.”

Just a few days before Elizabeth turned nine, her father died. She did not react with the calm acceptance that he modeled. Over the next months, Elizabeth had terrible temper tantrums. She resented people who tried to help, misbehaved and tried the patience of her grieving mother.

As Elizabeth grew older, she longed to trust God as her parents did. Her romantic personality, given to extremes, caused her to believe she loved God more than life at one moment, and plunged her into deep despair about her standing with Him at the next.

Elizabeth married a minister like her father, Rev. George Prentiss. They had a happy marriage and loved each other deeply. By 1852, God had blessed them with a daughter, Annie, and a son named Eddy. Elizabeth was expecting their third child when Eddy got sick.

At first, the doctor didn’t think it was serious, but he was proved wrong. Today, doctors would diagnose meningitis—they called it “water on the brain.” Elizabeth showed unimaginable courage in preparing little Eddy for death, telling him stories about what Heaven would be like and urging him to trust Jesus.  He died on January 16th. At the funeral, the choir sang the hymn, Thy Will Be Done. Elizabeth wrote, “It was like cold water to thirsty souls. This was all we had to say or could say.”

Just three months later, on April 16th, little sister Bessie was born. She appeared the picture of health, but on May 18th, Bessie suddenly became desperately sick. She died the next day.  The family lost two children in five months. “My faith has staggered under this new blow,” Elizabeth wrote, “and I blush to tell how hard I find it to say cheerfully ‘Thy will be done.’…Oh how I do wish, do long to feel an entire, unquestioning submission to Him who pities while He afflicts me.”

Elizabeth grieved deeply, but trusted God through these two heart-wrenching losses. Unlike the little eight-year-old version of herself, she would not rail against God in her grief. But why not? What had Elizabeth learned that caused her to accept this difficult providence with faith?

There is purpose in suffering. “We can’t understand it,” Elizabeth counseled a friend, “but I have been thinking that this [suffering] might be God’s way of preparing His children for very high degrees of service on earth or happiness in heaven.” Elizabeth learned to be deeply sympathetic with other grieving parents through her own losses; comforting them with the comfort she received (2 Cor. 1:4). She wrote a book titled, How Sorrow was Changed into Sympathy, that was widely distributed as a help to those who had experienced the same kind of loss.

God is good, and sovereign over all things. After Bessie died, Elizabeth was understandably overcome with grief. She preached to herself constantly, repeating over and over, “God never makes a mistake. God never makes a mistake.” She knew that the same God who watched over the sparrows (Matt. 10:29) watched over her children with tender care.  She compared God to a master gardener, who intentionally plucked her children as a gardener might pluck a beautiful blossom from a flower bed.

She knew God personally through the Bible and experience.  Elizabeth wrote, “We have to read the Bible in order to understand the Christian life, and we must penetrate far into that life in order to understand the Bible. How beautifully the one interprets the other!” As a result of this combination of learning and experiencing, Elizabeth could say, “My heart sides with God in everything, and my conception of His character is such a beautiful one that I feel He cannot err.”

Suffering did its work in Elizabeth’s life, causing her to have a steadfast faith in God, who carried her through every difficulty (James 1:2-4). Her trust in the God she knew so well inspired her to write her most famous hymn, More Love to Thee, which included the following lines: