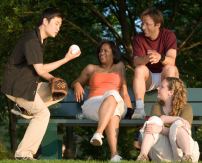 John Bunyan, the writer of Pilgrim’s Progress, said that is “better to be born a toad than to die unconverted.”

Why? Because toads don’t go to hell and humans do.

The subject of hell is so solemn that our natural instinct is to either ignore it or reject it. Yet, like the cancer patient before his doctor, it is better to hear the whole truth.

Once a woman told me, with an nervous giggle, that she “guessed it would be best to go to hell since all her friends would be there.” But she was wrong. Her acquaintances might be there, but they will not be her friends. Here is a list of the people the Bible says will be in hell:

Evil doers, blasphemers, wretches, those behaving like snakes and vipers, wicked slaves, weeds in the wheat, bad trees bearing bad fruit, chaff, vessels for common use, goats on His left hand, lovers of darkness rather than lovers of light, objects of wrath, mockers of God, disobedient, arrogant, the self-seeking, the sexually immoral, enemies of the cross of Christ, despisers of authority, experts in greed, lawless men, perverted persons, grumbles, faultfinders, scoffers, the adulterous, magicians, sorcerers, thieves, idolaters, the cowardly, the vile, and all liars.

Among the inhabitants of hell are those who follow the corrupt desires of their sinful nature, those who exchange the grace of God for a license for immorality, those who deny Jesus Christ our only sovereign and Lord, those who boast about themselves and flatter for their own advantage, those who divide you, those who do not have the Spirit, those who follow mere natural instinct, those who reject the preaching of the word and will not listen, those who devour widows’ houses and for a show make lengthy prayers, and those who are disobedient to parents.

But hell also includes lovers of pleasure rather than lovers of God, those who worship and serve created things rather than the Creator, slaves of depravity, those who invent ways of doing evil, the senseless, faithless, heartless and ruthless, those who know their actions deserve death yet still do them while also approving of others who also do the same things. And hell includes all hypocrites.

These occupants of hell are not going to be on their best behavior. In fact, Jesus said those who live in hell will experience “weeping and gnashing of teeth.” “Weeping” speaks of endless depression; “gnashing of teeth” speaks of eternal anger. There can be no amiable relationship with such people. Those fellow inhabitants of hell who once loved you here, will despise you there.

But this is not the main discomfort of hell. Puritan William Gurnall said, “We fear men so much, because we fear God so little. One fear cures another. When man’s terror scares you, turn your thoughts to the wrath of God.”

Hell is a stark absence of all God’s favor, an endless domination of sin, a place of pain and suffering, an asylum of pangs of conscience, anguish, despair, and uncontrollable hatred. Jeremy Taylor described it as “a death without death, an end without end, for death shall ever live, and their end never begin.”

Nobody should want to go to hell. Though your own sin made you a future citizen of hell, you may still turn to Christ to be delivered from God’s wrath. God made a way of escape through Jesus Christ.

The Bible calls Jesus “the Savior.” The words means “Rescuer.” He alone can rescue you from a certain future in hell. By taking man’s sin on Himself at the cross, He paid the complete price for all who will come to Him. If you will believe in Him (trust or rely upon Him) you will escape the judgment you deserve. It is not faith in yourself that saves, or merely faith in general, but faith in the Rescuer alone.

Trust Christ the Savior and be released from your fears of hell forever.

“He who believes in Him has eternal life” John 6:47