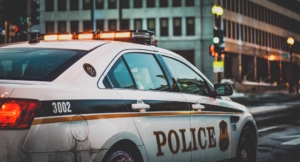 I got a traffic ticket last night, my first in about ten years. I wasn’t speeding or running stop signs or driving with expired registration. I neglected to use my turn signal . . . while stopping to make a right turn at a red light . . . in a “right turn only” lane . . . at 11:15 PM . . . in a quiet town in Missouri . . . with no other cars on the road around me . . . no other drivers who needed to know which way I was about to turn (even the deputy who stopped me was in a dark parking lot across the street, not following me on the road).

A few seconds after I stopped, and looked, and made my very safe right turn on red, I heard the siren and saw him behind me. I truly didn’t know what I had done wrong. At first I assumed he would pass me on the way to some emergency. Nope, he stayed behind me, and I pulled over. When all was said and done, the deputy had written me a ticket—for nothing more than failing to use my turn signal.

After the encounter, I continued on my way home, citation in hand, being careful to signal for EVERY turn. As I drove, I pondered my options: admit my guilt and send in the probably hefty fine, or go to court and argue my case based on the unreasonableness of this citation. My 12-year-old son who was with me at the time loyally took up my cause, wondering out loud why the deputy thought my no-signal turn was such a big deal. He even threw in a comparison to the overzealousness of Barney Fife on the Andy Griffith show. As much as I wanted to affirm his complaint, I instead explained that I had indeed failed to signal as required by Missouri law (required for any turning movement, as I have since confirmed), and therefore could not rightly complain about getting the ticket. The deputy did his job, I explained, and we should not speak disrespectfully about him.

We finished our conversation as we arrived home, and I ended with this comment: “I deserved the ticket since I failed to signal as required by law, so I have no basis for a legitimate complaint. If the deputy had chosen to give me a warning rather than a ticket, that would have been mercy.” Then, a few lessons about mercy then began to formulate in my mind:

First it occurred to me that it was not the deputy who initiated the chain of events that led to me being ticketed. I put myself in the position of being subject to that deputy’s right to decide whether to warn me or ticket me. Had I not broken the law (albeit in a very minor way), I would have remained free from his authority to interrupt my evening with his lights and siren. By driving my car in his jurisdiction, and by failing to act as required while driving in his jurisdiction, I subjected myself to his judicial discretion.

We all knowingly live in God’s jurisdiction. Even the atheist knows there is a God, that the universe is His by creative authority, and that His universe is subject to His rules (Romans 1:18-32 makes this abundantly clear). Therefore, by knowingly living in God’s jurisdiction and under His rules, every human being knowingly subjects him/herself to God’s judicial discretion when wrongs are committed. When people are judged (i.e., condemned) by God, it is not He who put them in that position. They put themselves there.

Secondly I was reminded that it’s not just breaking “big” laws that make me eligible for punishment. Depending upon where you live there are laws that may seem petty—laws that regulate parking, walking, crossing the street, spitting on the sidewalk, or even keeping your yard neat and tidy. You can be detained, cited, and pay a fine for any of these, according to local laws. Likewise, in God’s jurisdiction it is not only the “big” sins like murder or robbery that warrant punishment. God does not only forbid actions that cause obvious harm to others. He also forbids covetousness (i.e., greed for material or personal gain), dishonesty, selfishness, disobedience to parents, disobedience to governing authorities (like speeding or failing to pay taxes), all forms of sexual immorality, and all degrees of drunkenness—even getting drunk in the privacy of your own home. When you act out in even one of these minor ways (that is, minor by the standards of our society), you break God’s law and you deserve His punishment.

Lastly I was reminded that those who possess judicial authority and discretion are not obligated to treat every person in the same way. If the very next night, someone else were to fail to signal at the exact same intersection, and the same deputy were to see and stop them, he would not be obligated to write them a ticket just because he cited me. He would have every right to extend mercy to that person, and I would have no legitimate complaint if he did. It is the same with God. As He says himself, “I will have mercy on whom I have mercy” (Rom. 9:15). In other words, mercy is His to extend or withhold as He pleases, not ours to demand.