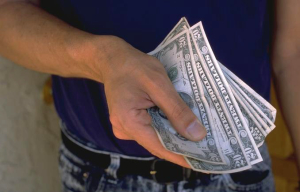 In his probing book called The Grand Weaver, well-known apologist and author Ravi Zacharias records a story he once read. Let me give it to you in his own words:

The writer described a man aboard a plane who propositioned a woman sitting next to him for one million dollars. She glared at him but pursued the conversation and began to entertain the possibility of so easily becoming a millionaire. The pair set the time, terms, and conditions. Just before he left the plane, he sputtered, “I—I have to admit, ma’am, I have sort of, ah, led you into a lie. I, um, I really don’t have a million dollars. Would you consider the proposition for just—ah, say—ah, ten dollars?”

On the verge of smacking him across the face for such an insult, she snapped back, “What do you think I am?”

“That has already been established,” he replied. “Now we’re just haggling over the price.”

When I read that story, one I had heard before, I felt rather smug, assured that surely I would not stoop to sexual sin even for a million dollars. Perhaps I don’t know myself well enough, but that is honestly how I felt about it.

Then I began to consider other areas of sin I struggle with, and I realized that maybe I had better not speak so swiftly about my vulnerability to temptation. In fact, I discovered that I might well be enticed to sin for far less. I recalled that I have sometimes been willing to give in to the temptation to overeat for a mere donut!

Eating donuts is not the same as committing an act of immorality. There are degrees of sin (“it will be worse for you than for Sodom and Gomorrah“), and degrees of commands (the “greatest command,” the “second” greatest, and “the least of these commandments“). Yet, disobeying God is always a sign of an independent and untamed will. And it always spells trouble.

How easily can you be enticed? Think it through. This exercise won’t be fruitless because you will surely face some allurement to sin before this day is out—one that will test your resolve to obey God.

Perhaps better than smugness about temptation, we who are true believers should try requesting help from God Himself. Jesus once said that we should pray, “Lead us not into temptation, but deliver us from evil.” For one thing, you will be much more aware of temptation if you are praying this way. But more than that, God is also very gracious toward His children. He does not want you to sin. He is disposed to help you when you cry out to Him.

Years ago, two Christian leaders conducted interviews with former pastors who had fallen morally. They noted that there was one constant refrain in the conversations they had with these broken men: “I never thought it would happen to me.”

“Be of sober spirit, be on the alert,” warned the apostle Peter. “Your adversary, the devil, prowls around like a roaring lion, seeking someone to devour” (1 Peter 5:8).

Don’t underestimate Satan’s expertise at enticing unwary believers to sin, nor his ravenous appetite for your moral destruction. As a friend once told me, “He hasn’t died of old age.”

No, the enemy of our souls is alive and well. And, though he cannot read your mind, his demons have often seen your weaknesses. Without a doubt you need the all-knowing, ever-present God to help you.

Don’t be smug. Ask Him for deliverance.