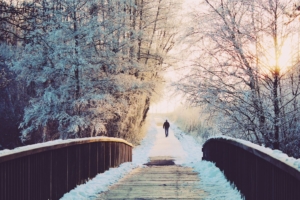 Earlier this year, my family moved from our almost ten year home in Kansas City. We left our church, our friends, and a big part of our ministry. Until our move, I was privileged to serve alongside five other men on a team of elders in our church. Leaving the people in our congregation felt as if I was being torn away from my family; it felt like I was leaving them behind. My only true consolation, and theirs, was this often repeated phrase in the Scriptures, “I will never leave you or forsake you.”

When Jesus was about to leave the world to go back to his Father, he gave his disciples a similar encouragement, “I will not leave you as orphans, I will come to you” (John 14:18). Jesus had been with them for three years now, walking, talking, loving, and leading them in the new way of his Kingdom. But as he spoke with them in that upstairs room, the time of his departure, set according to the predetermined plan of God, was near.

He was their teacher, friend, and God, but he was leaving.

I remember the afternoon that my Grandpa almost died in a car accident. A van swerved into his lane on a bridge and he was forced over the edge. However, before his vehicle crashed down into the creekbed, he was catapulted from his seat through the windshield and onto the pavement. As was his custom, he wasn’t wearing his seatbelt.

It was reported to us that the first responders initially didn’t believe he was alive. But he was, and he was rushed to the hospital. I remember the cries of relief that came from my Dad when we got the news that he was going to make it.

But a few years later the cries were different. After Grandpa’s agonizing fight with brain cancer, he finally left us to go to his Savior. In the moments following his last breath, I remember my Dad blurting out between sobs, “What am I going to do without my Dad?”

I don’t imagine that it was much different on the day Jesus died. To the disciples, Jesus was gone.

After promising not to leave them as orphans, Jesus goes on to say:

“These things I have spoken to you while I am still with you. But the Helper, the Holy Spirit, whom the Father will send in my name, he will teach you all things and bring to your remembrance all that I have said to you. Peace I leave with you; my peace I give to you. Not as the world gives do I give to you. Let not your hearts be troubled, neither let them be afraid” (John 14:25-27).

After Jesus died, he rose and appeared to the disciples, strengthening them and reassuring their hearts. But, shortly after his resurrection, he left again, this time ascending to the right hand of the Father. Just as before, Jesus was gone.

But the promise remained. “I will not leave you as orphans.”

When Jesus said this he meant that his Spirit would come and dwell with them. Later, as John records, he says this will be a great advantage for the disciples (see John 16:7).

Here is a big reason why Jesus is better than anyone else—even in death he wasn’t taken away. He is the God who can leave and yet never be gone. Sometimes we take comfort that our loved ones watch over us somehow after they die, but the Bible doesn’t offer us that kind of hope. The Bible promises something much better — that the Spirit of Christ dwells in us. In this way Jesus is always with us. This is much different than even the best Grandpa, and much more reassuring than even the most caring and loving pastor.

He will never leave us.