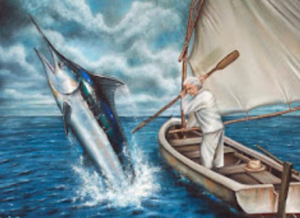 In Earnest Hemingway’s Old Man and the Sea, the superstitious old man on his dilapidated skiff had  no luck catching any big fish for a long time, but this day as he allowed the wind to carry him out much further than before, and after nearly dying from exhaustion, he battled and conquered the big one.

Strapped to the side of the skiff, he began his arduous trip back to the beach in Cuba where he would finish out his life of poverty and past memories, patronized by his friends. They would be proud of him. But soon the sharks began to attack the fish, taking chunks out of its carcass. The old man fought them with whatever club or weapon he had until nothing more was there and his strength was gone. Though they eventually left, they had eaten away the fish to its bones and head.  That’s what people saw the next morning on the beach — the old man’s skiff and the bones and head of a once mighty fish strapped to the side of the boat, a trophy that provided no worth.

There are numerous ways perhaps to interpret what Hemingway wrote in his classic novella, but they are all based on the ironic truth that most of the world gains very little, if anything, in life that is not eaten away.

Haggai the prophet reported something similar to Judah after they had returned to the homeland. Because they would not focus on the worship of Yahweh, but rather on their own houses and prosperity, they realized little of their supposed gains. They were being judged by God.

Even as you read this some of you are losing percentages from your retirement every day (if you have one at all), while at the same time prices rise at the pump and in the grocery store and literally all across the board. And the prospect is that we will experience a more serious inflationary period due to inordinate government spending and low productivity in the pandemic and failure to be prepared with fossil fuels.

Are we experiencing judgment from God?

There are many reasons why we should think that we are. As a whole, we are an immoral people, and selfish. We have displayed anger and polarization as never before. Wickedness abounds. Deceit is in every corner in the high places and the low. We bite and devour each other like the sharks did the big fish. It would not be out of character for God to bring bone-cracking judgment on us.

For the people of Haggai’s day, there was yet a promise of recovery in the future, however. And there is the same for the people of God who have lived among the sins of the people, sometimes as guilty in particulars as the world around them. Yes, surprisingly, Haggai received promises from God that there would be a future deliverance.

And there is hope for the people of God today. We also will be delivered, not necessarily during our days on earth, but by the future visitation of Christ to his earth to bring judgment and rescue. “Look up! Your redemption draws nigh!” said Jesus. This is your hope. And with that coming will be an inheritance, a shared inheritance with Christ as joint heirs.

While we face our immediate trials, let’s not complain as our money means less, as our earthly riches dwindle, as the rising waters of wickedness reach flood stage. Look up and beyond this present dark age to the coming of Christ and the consummation of his promised kingdom!