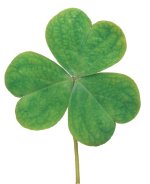 Do you celebrate St. Patrick’s Day? Where I live, there are parades and parties on March 17th in order to honor St. Patrick, who was a famous missionary to Ireland. Many people think that wearing green on that day is lucky. They think about luck a lot on St. Patrick’s Day—about lucky shamrocks or finding a leprechauns’ pot of gold—which is funny, since Patrick, the man we honor on that day, didn’t believe in luck at all.

Patrick was born in England a long time ago—about 400 years after Jesus died on the cross and came alive again. Patrick went to church every Sunday with his family. His grandfather was the pastor of a church, and his father was a deacon. But even though Patrick knew about God, he hadn’t trusted Christ to forgive his sins and make him new inside.

When Patrick was almost 16 years old, his parents had to go to a nearby town on a business trip. Patrick stayed at home with the servants. One night when everyone was asleep, a gang of Irish slave traders surrounded Patrick’s home. These men were pirates and kidnappers who took people back to their own country and sold them as slaves. They captured Patrick and all the servants, linked them together with heavy metal chains, and loaded them into a boat headed for Ireland.

After a two-day journey in the boat, Patrick was sold to a farmer and given the job of watching the sheep. He had to stay outside all night, guarding the sheep and watching for wild animals that might attack them. He was very lonely as he watched his flock, and even when he was with other servants, he couldn’t understand the language they spoke.

It sounds like Patrick was unlucky, doesn’t it? But that’s not what he thought. When there was no one else to talk to, Patrick began talking to God. In a letter he wrote later, Patrick said, “I became aware of my failings and began to turn with my whole heart to the Lord my God . . . . He cared for me even before I knew who He was, before I could tell the difference between right and wrong. He protected me and loved me even as a father does his own child.” Patrick knew that God was watching over him and arranging all the circumstances around him—what happened to Patrick had nothing at all to do with luck!

During the next six years, Patrick remembered the teaching of his parents and his pastor and spent much time in prayer while watching the sheep. Patrick also learned to speak the language of the people in Ireland and about the gods they worshipped.

After six years, Patrick was able to escape from his master and hire on as a worker on a boat headed for England. He was going home! Can you imagine how happy his parents were to have him back again? But after Patrick returned to England and to his parent’s home, he began to long to return to Ireland. He wanted to go back to teach the people there about Jesus-God’s Son who lived a sinless life on Earth and suffered and died to make a way for His people to be forgiven.

With the help of his church, Patrick received training in God’s Word and returned to the place where he had been taken as a slave. This time, he came back to free others who were slaves—slaves to sin and to false gods—and to teach them about the one true God. Thousands of people came to know Jesus over the next 40 years as Patrick preached in Ireland. Do you think that was lucky? Patrick didn’t. In a letter he wrote late in his life, he said, “You must understand—because it is the truth—that it was all the gift of God.”