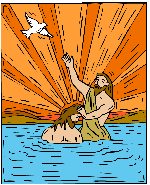 Have you ever played on a team that had matching uniforms? It’s fun to be part of a group of people who are all dressed the same because they all have the same goal. Being dressed like your teammate means you identify with them. People can easily tell you are a part of that group. Today I’m going to tell you about how Jesus identified with us, and a way we can show we identify with Him—how we show everyone that we are on Jesus’ team.

Long ago, God sent a man named John the Baptist to Judea to get everyone ready for Jesus. John preached about how God wanted His people to live. He told people who had two coats to give one to the poor. He told people who had lots of money to give to the needy. He told soldiers not to bully others and take things from them. He explained that God wanted His people to love Him from the heart, and that was just as important as following God’s rules.

The people were amazed at what John taught and many, many people asked him to baptize them in the Jordan River to show how sorry they were for their sins. When these people were baptized, they were dipped in water as a symbol of starting over to live in a way that would please God. John baptized all the people who had changed hearts, who loved God and wanted to obey Him.

One day, Jesus came to John and asked to be baptized. John was amazed! He knew that Jesus had never sinned—why would Jesus need to be baptized? John said, “I should be baptized by you, and you are coming to me?” But Jesus said, “Let it be so for now. For in this way we shall do all that God requires.” So John agreed.

The Bible says that Jesus was baptized to “fulfill all righteousness.” Jesus did none of the wrong things people usually do, but He also did all of the right things God required. Doing all the right things God asked is what it means to “fulfill all righteousness”. One of those “right things” God asked Jesus to do was to be baptized. Many people think that in His baptism, Jesus identified with the people He came to save. (You remember that identified means that Jesus showed everyone he was on the “team” of the people who love God and want to please Him.)

John did baptize Jesus, and as soon as Jesus came up out of the water He began praying. The Holy Spirit came in the form of a dove and landed on Him. From Heaven, God the Father said, “This is my own dear Son, with whom I am pleased.”

Jesus was about 30 years old when He was baptized. Soon after this He chose His disciples and began His public ministry. Jesus’ disciples began baptizing people too, and soon more people came to Jesus than to John the Baptist. Do you think John was jealous? No, John knew that the job God gave him was to get people ready to hear from Jesus. John was glad that people were going to Jesus and that hearts were being changed. He said, “Jesus must become more important while I become less important.” John knew that even though he could tell people about God, he couldn’t do what Jesus could do—He couldn’t take away sins.

What Jesus did was wonderful, wasn’t it? He came from heaven and was born into a human body. He grew up, just like you are growing up, and even though He is God, He was baptized to show us He is on our team. Because Jesus was one of us, He was able to die on the cross and take away the punishment for our sins. In the same way that anyone on a team that scores earns a run for the whole team, Jesus’ punishment on the cross counts as ours because he identified with us.

Did you know that Jesus wants His people to be baptized, too? Baptism is a way for people whose hearts have been changed to love God to tell everyone that they are on God’s team. It is a picture of dying to sin (going down into the water) and being resurrected—made alive again to live for God (as they come up out of the water). The people who love God identify with Jesus in baptism, and say to everyone, “Jesus died and took my sins away. Jesus was resurrected and so am I—I have a new life because of Him.”