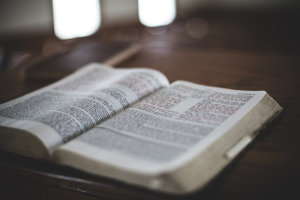 Proverbs 22:15 informs us that “foolishness is bound up in the heart of a child,” and one will search in vain to find any biblical indication to the contrary, that children are naturally inclined toward wisdom. Yet the Proverbs fall short of automatically labeling young children as “fools.” Instead they are identified as “the simple,” “the youth,” and “the naïve,” implying inexperience and ignorance while not denying their natural inclination toward foolishness.

The Proverbs also exhort children to seek after wisdom, and parents to instruct them in the way of wisdom, all with the hope that they will avoid becoming fools in the fully-developed sense, and the inevitable (earthly and eternal) consequences of foolishness. A sobering “fork in the road” is set before every child, and a weighty burden placed on every parent.

Consider the following ways you can apply the book of Proverbs in shepherding your child away from folly and toward wisdom:

Instruct yourself. Before you can apply the book of Proverbs to your children, you must become familiar with it yourself. Conveniently, there are 31 chapters, so how about meditating on one chapter each day for a month, or two months, or six, or even as a lifelong pattern?

Choose your children’s associations wisely. Build and maintain an appropriate “fence” around your children to minimize their exposure to fools and their folly. This will include not only the time spent with other people, but also spent with access to worldly influences through the Internet, music, movies, and television. At the same time, magnify the time they spend at home under your influence, the time they spend with other godly and wise people, and the time they spend filling their minds with the right kinds of information. Be diligent and unapologetic in your stance here, based on Proverbs 13:20—“Whoever walks with the wise will become wise, but the companion of fools will suffer harm.”

Understand your children, and help them understand themselves. Take note when their patterns of behavior align with proverbial descriptions, whether wise or foolish. Identify and address these patterns, with praise or correction, even when they are very young. For example:

To the attentive parent these patterns are visible from the time children are little, and should be corrected then. Even more serious are ongoing patterns of foolishness as they enter into adolescence. After that point, habits are often deeply entrenched and very difficult to correct.

Discipline your children. The words of Scripture speak for themselves.

Foolishness is bound up in the heart of a child, but the rod of correction drives it far from him. (22:15)

The rod and reproof give wisdom,

Discipline your son, and he will give you rest;

Warn your children. Teach them about the inevitable consequences of foolishness and wickedness. For example:

The wise will inherit honor, but fools get disgrace. (3:35)

The iniquities of the wicked ensnare him, and he is held fast in the cords of his sin. (5:22)

There is much more—the value of diligence and hard work and the consequences of laziness, the importance of honesty and integrity, principles about the wise use of resources—I could go on and on. Parents who faithfully study and apply the Proverbs in order to understand, instruct, and correct their children will not be wasting their effort.