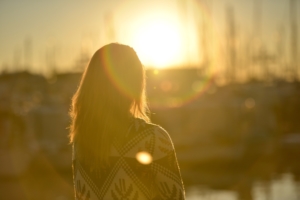 Repentance is, in one sense, simple. In biblical terms it may be likened to a U-turn in one’s heart and life. It involves no complex formula, but is simply to turn away from sin and self and a worldly mindset and life, and turn to God in faith and submission. The true repenter (one and the same person as a true believer, by the way) changes. He or she goes from being a rebel in God’s kingdom, to being a faithful, loyal, obedient follower, at peace with God through the sin-bearing sacrifice of his Son, our Lord Jesus Christ.

The first recorded words of Jesus in the Bible, spoken to the inhabitants of Galilee in Israel, included the command, “Repent and believe in the gospel” (Mark 1:15). Later, Paul tells us that God commands repentance of all people (Acts 17:30). Apart from repentance, all people will perish, and understood biblically, “perish” does not merely mean “die.” All people will die, but not all will perish. To perish, in biblical thought, is to die both physically and eternally as the result of God’s judgment. God’s wrath brings perishing for sinners, and yet those who repent can avoid this end. This is why Jesus said to the people who brought him the news of Pilate’s murder of certain Galileans in the temple, and also of the eighteen who had died when a tower suddenly collapsed, “Unless you repent, you will all likewise perish” (Luke 13:3, 5). His statement wouldn’t make much sense if “perish” means the same thing as “die.” Everyone dies, but only God’s enemies perish (according to the way the New Testament writers used the word).

John 3:16—”For God so loved the world that he gave his only Son, that whoever believes in him should not perish but have eternal life.”

So the simple and obvious key for a human being to avoid perishing is repentance. If you will repent (which goes hand in hand with believing the gospel—trusting Jesus for your salvation), you will be saved. If you don’t. . . rather, if you won’t, then you will perish. But if repentance is so simple, and the consequences of not repenting are so dire, why doesn’t everyone repent? Why will there be many—actually, the vast majority of mankind (as Jesus said in Matthew 7:13-14)—who will refuse to do so and suffer destruction instead? The answer is this: the heart of fallen man is hard, and his nature is naturally inclined away from God and toward sin and self and a worldly mindset and life. People are not “good” by nature. They are, “by nature children of wrath” (Ephesians 2:3). Man is naturally bent toward evil, and away from God’s rule and authority, which leads to them being naturally destined for destruction (wrath). They don’t even like to admit God exists and has authority over them. Or, if they do admit this while still in their natural state of rebellion, they invent religious philosophies and schemes that satisfy their own desires and pacify their own consciences, but which do nothing to alleviate God’s wrath. They only anger him further.

Apart from God’s mercy in granting a person new life—regeneration, the new birth, life from God’s Spirit—no person will repent and believe. Their nature is against it, and they will not go against their nature.

The most frightening example of this reality in the Bible is found in the book of Revelation, chapter 9. Viewing the time in the future as humanity nears the end of all things, God pours out his divine wrath in a series of terrifying “trumpet” judgments. The fifth trumpet blast reveals a demonic horde, released from the underworld to torment mankind for five months. They are described in bizarre terms resembling the description of a plague of locusts with tails and stings like scorpions. Their torment is so severe that men long to die, but cannot. Only believers are shielded from their fearsome cruelty (9:4). Then, as if that were not enough to convince even the most hardened of God’s enemies to lay down his arms and repent, a demonic army numbering two hundred million sweeps across the earth, slaughtering a third of mankind! But amazingly, as explained in the last two verses of chapter nine, these awesome judgments from God will not bring about repentance. Clearly, by this time, God’s mercy in granting the grace of repentance has run out, and humanity is willfully, rebelliously helpless to go against their own nature. They go on worshipping demons and idols of silver and gold, murdering, stealing, committing sexual sin, and engaging in sorcery. Are they all blind? Did they not just experience the torment of the demonic locust plague and witness the slaughter of one third of their race? Do they not realize that even worse will come to them if they do not repent? Do they think God is finished pouring out his wrath? Reading this chapter, I feel like shouting at these people to wake them up! But even if I could, it would do no good. They are hemmed in by their own desires, locked in their natural rebellion against their maker, destined for wrath.

You, by contrast, live in a day and time when God still does grant the mercy of repentance. In fact, his kindness to you in all the good you experience is meant to lead you to repent of your foolish self-seeking ways and to humbly trust and obey his Son (Romans 2:4). Will you repent, while God still grants repentance? Will you repent while you can? I hope you will.