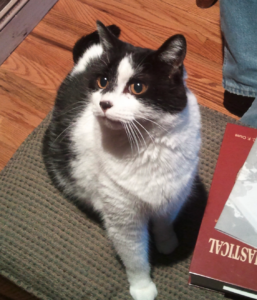 I’m lazily reading James Herriot’s tribute to cats called Cat Stories, illustrated by Lesley Holmes (the illustrations are as satisfying as the stories). Herriot has an attractive and thoughtful manner of relating his veterinarian stories, as some of you will know.

Herriot’s book allows me to introduce my cat. Her name was first Yoder, because we found her behind the Amish store called Yoder’s in Jamesport, Missouri. Of the litter, she was the most mellow and a bit smaller and seemingly sweeter. We got permission to take her home and found out that her mellow spirit had more to do with worms than God-given temperament. However, worms removed, we had a real kitten to enjoy.

Now, I had no affection for cats having grown up in a dog family. With dogs, as you also know, you can tell if you are loved much easier than with cats. With cats, you assume the opposite and then typically watch them do absolutely nothing to alter your perception. But as time went on, we grew to love her. And we think she was fond of us — especially the children. And,  though it took some time to make public announcements about it myself, I loved her too.

She was the children’s study buddy and she rarely left their side. She was taught to use the toilet, which is a chapter in itself and something this peripatetic family valued much because that meant that no liter box was needed. And, the truth be known, I was usually quite happy to see her upon returning home from my travels.

But here’s the truth about Witty (the enduring name that evolved from Yoder somehow). I loved her mostly for what she meant to my children. She played a role in the development of their affections. Her main job was to exist, while the kids gave, to my recollection, far more than she returned. They would not say that, but that is because affection is a powerful deceiver. When you truly love someone or some animal, even a cat, you will sacrifice and not regret the effort.

I watched a man a few weeks ago walking in drenching rain with his dog, I knew that this man loved his dog. He was like a human cuckoo bird to many of us, because he would jump out the door yelling at his dog to be quiet whenever we walked by his home. He wanted the world to think well of him, just as he did. The other day when he was walking in the mist and cold, I hailed him from the front porch where my wife and I were temporarily standing: “How are you?” “I’m better, I guess.” “Oh! Have you been ill?” “No, [pause] my wife recently died.” We were shocked. We didn’t know anything about this. We immediately asked him to come to the porch where it was dry so we could talk further to comfort him.

He wept as he talked of his wife whom he missed terribly. He loved her when she could do nothing for him. She had gotten ill with a deadly virus and her many ailments combined with the virus caused her death after a period of time. He served her night and day, getting nothing in return except her words and looks of appreciation, until she could not talk. He expended himself to a deep-boned weariness. He would do it a thousand times over if he could.

It wasn’t what he received what was important, but that he got to give to her. How strange that mystery is. She accepted his affection. This was essentially all she could do, and he wished he could have done more. In fact, he is a Christian and his love was amplified in dimensions most people would not understand who don’t know Christ.

No one will fully understand this mystery of loving even when there is little in return. Jesus is the best picture of loving when not loved in return. He loved us when we were rejecting him. Have you forgotten that? How can we compare our feeble love to his even now, after our conversion? “We love because he first loved us” (1 Jn 4:19). His love is eternal, deep, satisfying. And, above all he demonstrated it “while we were yet sinners” (Rom 5:8).

“Greater love has no one than than this, that someone lay down his life for his friends” (Jn 15:13)

And that is what he did for you.