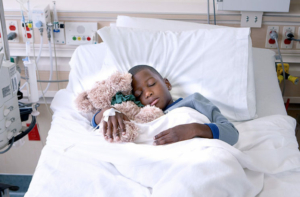 It was told as true, but I cannot be sure of that. However, such love as I’m about to show you has been seen in the history of the world many times, in one form or another. It is sacrificial love, like Christ’s. It is the love that Jesus had and calls us to. Jesus himself said, “Greater love has no man than that a man lay down his life for his friend” (Jn 15:13). I will tell you the story as I imagined it when I first heard it.

A small child, perhaps six or seven, became very ill. She needed a transfusion of blood. Her blood type was unique and not available in the small hospital where they lived. Yet, the older brother shared the same type. With pity and love for his little sister, he offered to share his blood for the emergency transfusion. Nothing else would do.

Preparations were made quickly. The hospital room was arranged with their beds side by side. There was no time for the normal examination of the older child’s blood, so the proper papers were signed allowing the transfer. It took some time to complete. The boy was given a mild sedative, but the sister was listless anyway, due to her near death condition. As the right amount of the brother’s blood entered the sister, she awoke, brightened, and displayed all her normal signs of life.

The brother was slow to awaken. Finally opening his eyes in a drowsy state, he furrowed his brow as if confused. And then he quietly asked, “When do I die?”

How Amazing Love Is

The admonitions of the Law of Moses and the Prophets are all fulfilled in the law of love. “Treat others the way you would have them treat you, for this is the Law and the Prophets” (Mt. 7:12). The New Covenant responsibility for the believer is similar: “Bear one another’s burdens and thereby fulfill the law of Christ” (Gal 6:2). Or, put another way, “Do not look out for your own personal interests, but for the interests of others” (Phil 2:4).

Love is the law of liberty and the royal law; it is greater than faith and hope; it is the perfect way and the virtue which we are to put on “above all.” It is “the perfect bond of unity.” We are to “walk in love, just as Christ also loved us and gave Himself for us.”

Love is an amazing virtue implanted in the one who believes in Christ as he comes to reside in the new believer by his Spirit. And when he comes, love is powerful.

What Goes and What Comes?

I once knew a man who had lived a life of bitterness in a sad and destructive childhood family. He carried grudges and plotted revenge, but on the outside he appeared to be a rough-speaking, but likable man, at least to those he liked. He was a truck driver.

This experience took place in a hospital as well. I had explained the way of salvation to him as he waited at his wife’s bedside. She was a faithful wife and a true Christian. After I left, he was so troubled about his life and the need to be forgiven that he went into the small chapel of the hospital and prayed as he had never done before. As he prayed with tears, yielding his life to Christ and trusting him for the gift he did not deserve, God answered and he was beautifully transformed. He told me just after this change, “I felt like a whole gut full of hatred and bitterness just left me.”

His life following proved the reality of that experience. Everything turned around. He became a loving husband and devoted father. His view of others changed from hatred to concern. He spoke about Christ to his friends and family and sought to show them what God could do for them. All his life he demonstrated that God had changed him.

Love is the most noticeable of the changes Christ makes in a person when he or she comes to him for salvation, the one who died and rose again out of such love. Since that gift of love is found only in Christ, why not ask him for it? Place your life in his hands, rely upon his death in your place on the cross and his sin-conquering resurrection life to take over your life. Make your heart the home of the Savior of love