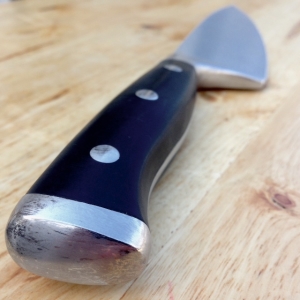 James, always questioning: Mr. Brockton, how do Satan or his demons interplay with our lives? Is there such a thing?

The wiser Mr. Brockton: The battle rages quite fiercely for believers in Christ who walk as they should. He opposes by distractions, obstructions, confusion and fear. But they have a special connection to inordinate desires in any human.

James: Do you mean that they create lust in us?

Brockton: No, but they seek to provide objects to excite our lusts, and lusts pursued provide an invitation, even when we think we are opposed to him. My story will illustrate:

When I entered the house of friends I hadn’t seen in some time, all was rearranged. In the center of the room was a special table with a long knife displayed on it. Almost immediately my host began to explain.

“We love this knife and paid a lot for it. Notice how beautiful it is. I don’t know if you know much about knives, but this is one of the best. We often just sit around the table and stare at it, commenting on its remarkableness.”

“In fact, we handle it regularly. We even toss it around the room to each other.”

As he spoke of tossing it, he reached out his hand to grasp its handle. I noticed that his first two fingers were missing at the joint. So, I commented: “It must be hard to catch with some fingers missing.”

“Well, these things happen with a knife like this. The knife is very sharp. It has a blade unlike any I’ve seen. It’s strong, so we don’t worry about it breaking, but it’s also like a razor. We try to be careful when we play with it.”

About this time a young boy entered the room, stopped to admire the knife, then scampered off. I commented, “I remember your boy. He’s grown a lot. Don’t you have a daughter as well?”

“If you don’t mind me asking, how did that happen?”

“Well, it was strange. There is a man who hangs around our house who loves our knife. He doesn’t seem to bother anyone else in the other homes, but then, they don’t have a beautiful knife like we do. He loves the knife and often comes to the door to ask if he may see it. We all feel that he is a frightening man, so we never allowed him to enter. He even looks through the windows. We were determined to refuse him, but he usually just smiles and says, ‘I’ll see you later.’”

“Well, one day the man came once again to the house and asked about seeing the knife. We refused as normal, but somehow he slipped past us and ran toward the knife. He used the knife to kill our daughter before we could even make sense of what had happened. He stabbed her several times right in our presence. I knew that we shared a proper respect for the knife, but I never expected this. Then he ran away mumbling, strangely, ‘Thank you. I’m so glad you love my knife.’”

“I’m sorry to hear of this tragedy.”

“Yes, it was so messy and awful. We cleaned up everything and detailed the knife again. You are only to use soap and water on a knife like this. We do miss our daughter, as you can imagine. We have guarded the door since that day much more carefully.”

Then the man stroked his chin with his two partial fingers as he asked, “Would you like to toss the knife with us? You really can’t hurt it.”

I had no desire for such a thing and quickly dismissed myself. Yet, the family seemed hardly to notice, for they had started their game once again.

James: I see. We cannot say that Satan makes us act in sin but our love for what he loves gives him special powers over us.

Mr. Brockton: You perceive well. And be warned. Satan and his demons have no affection for you but wish to kill, steal and destroy, without mercy. Pursuing lusts of any kind is a dangerous game. We are told to “resist him,” but we do not resist, but attract him, when we love what he loves.