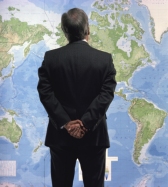 Several years ago, before Eastern European Communism was dismantled, I interviewed the leader for the Hungarian Baptists in his office in Budapest. He related the story of Johann Gerhard Oncken and his influence on workers in Hamburg after the great fire there in the 1800s. Oncken used to say, “Every Baptist a missionary.” The charge had its affect when some of these workers reached the twin cities of what we now know as Budapest, their hometown, resulting in the first Baptist work in Hungary.

There is wonderful romance to that story, and a great result, but I believe Oncken was wrong in calling all believers who are willing to evangelize “missionaries.”

Teams of youth or adults sent from churches to build buildings or to do Vacation Bible Schools or to evangelize overseas are often tagged, “missionaries.” A man sent from a church to be a teacher in a Bible School might also be called a missionary, or a Christian who helps by working in a medical clinic, or an orphanage. But what is the true meaning of the word?

What is a Missionary?

A typical definition of a missionary is like that found in Wikipedia, the online encyclopedia: “A missionary is a member of a religious group sent into an area to do evangelism or ministries of service, such as education, literacy, social justice, health care and economic development.” This description is way too broad, though it represents the common view.

By studying the apostles’ work in the New Testament, our only lead as to what a missionary actually is, we learn that missionaries are focused on these five responsibilities:

Being a missionary is about much more than doing evangelism, a concern for all believers and special gift of some. Those who help missionaries in any aspect of their work are very much needed, but are not missionaries themselves. They should be thought of as “missionary support personnel” or some designation such as this.

Missionaries may go overseas or work on the soil of their own country. The home base of a missionary may be anywhere, but the missionary himself must think of stretching out the boundaries of Christianity, or planting churches wherever God leads him. He may stay in one place for a long time, establishing new churches, but should not think his work is done if he does not pursue starting churches beyond where he is.

Everyone cannot be called a missionary. Everyone can sow gospel seed, or influence other believers, or help build an orphanage, or labor as a nurse, all wonderful ministries in themselves, but we should distinguish the missionary as that foundational person called upon to start and strengthen churches.

Because of the strategic work of missionaries, they should be men with impeccable character, sound doctrine, wisdom and self-initiation. They must be men who will pay a price to serve Christ, sometimes at the cost of their lives.

Think of the importance of the missionary’s work. Through missionaries beachheads are established in many parts of the world. These churches begin to spawn other churches as God’s Spirit works through the churches started. A man who is allowed by God to begin several churches, or to start churches that reproduce other churches, does a work in the world that is of inestimable value. We should love them and support them. It is true that we should support service personnel who help the mission enterprise also, but the critical person for beginning churches in remote areas is the missionary. Hold up his work in prayer and support him with your gifts and personal care.

Missionaries are people with initiative. They think deeply about the truths of God. They have verbal gifts, since so much has to be communicated, though they may not be the best speakers you have ever heard. They are always thinking freshly about how the work can be done. They strategize and love to see multiplication. They pour over the Bible and become leaders in Bible knowledge, comprehending both the teachings and the spirit of the Bible. They are careful not to lead churches wrongly, because mistakes made in one church may be passed to generations of churches as they spawn new ones.

Does God want you to be a missionary? If God has this life for you, the church will recognize your gifts and your longing. And they will recognize if you are ready now, or need some additional preparation.

Perhaps one day you will find yourself in the position of Paul and Barnabas. Out of that pool of prophets and teachers in the city of Antioch of Syria, “while they were ministering to the Lord and fasting, the Holy Spirit said, ‘Set apart for Me Barnabas and Saul for the work to which I have called them. Then, when they had fasted and prayed and laid their hands on them, they sent them away” (Acts 13:2-3).

(Note:This insert is longer than usual. Print it front and back of a sheet of paper and fold.)